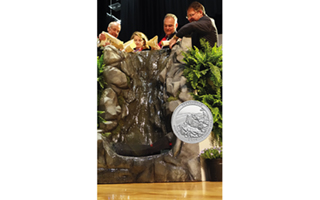 Half of those attending the ceremony, held at Skyline High School, were students from two high schools, a middle school and four elementary schools.

Noting his many ties to Virginia, U.S. Mint Deputy Director Richard Peterson said: “I am very happy to be in Front Royal, where my father attended Randolph-Macon Academy, to honor a state with such a rich history and promising future, a state my family and I call home. The Shenandoah National Park Quarter emphasizes one of my favorite things about Virginia — its natural beauty — beauty that must be enjoyed and at the same time protected for future generations.”

On April 3, U.S. Mint officials hosted a coin forum at Rappahannock County Library in Washington, Va., during which bureau officials updated those in attendance about Mint coin programs, and attendees provided Mint officials with feedback about existing and potential coin programs.

The reverse of the 2014 Shenandoah National Park quarter dollar depicts a day hiker taking in the view from Little Stony Man summit. The design was created and sculptured by U.S. Mint Medallic Sculptor Phebe Hemphill.

The 2014 Shenandoah National Park quarter dollar, the 22nd of 56 coins to be released under the America the Beautiful Quarters Program, was released into general circulation through the Federal Reserve on March 31.

Also on March 31, the U.S. Mint made available to collectors circulation-quality Shenandoah National Park quarter dollars in bags and rolls.