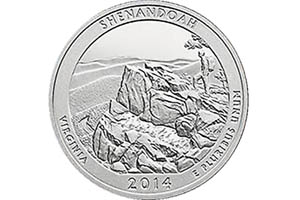 The Washington, D.C., branch of the Department of the Interior Federal Credit Union is sponsoring and overseeing the roll exchange.

The 2014 Shenandoah National Park quarter dollar — the 22nd quarter dollar issued under the America the Beautiful Quarters Program — is scheduled to be released into general circulation March 31 through the Federal Reserve Banks.

March 31 is also the date that the U.S. Mint will place on sale 2014 Shenandoah National Park quarter dollars in circulation quality in bags and rolls at numismatic premiums above face value.

Collectors will be able to place orders for a three-roll set for $46.95 per set. Each set will include one 40-coin roll each of quarter dollars struck at the Philadelphia Mint, Denver Mint and San Francisco Mint. Each coin will bear the Mint mark of the respective facility where the coin was struck — either P, D or S.

The quarter dollars will be offered in 100-coin canvas bags from the Philadelphia, Denver or San Francisco Mints for $34.95 per bag.

The quarter dollars may also be ordered through the Mint’s subscription program. Visit www.usmint.gov for details. ¦