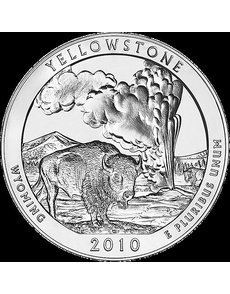 The U.S. Mint has imposed a number of restrictions on how its authorized purchasers can sell the coins, including prohibiting sales outside the United States.

Seven of the 11 authorized purchasers approved by the U.S. Mint to purchase the 2010 America the Beautiful 5-ounce .999 fine silver bullion coins did so by press time Dec. 17 amidst the expansion of sales restrictions by Mint officials.

Most recently, Mint officials additionally barred the authorized purchasers from selling any of the bullion coins to customers outside the United States.

The participating dealers are:

The first five authorized purchasers listed above placed their orders on Dec. 10. Their acquisition cost for each 5-ounce silver coin represents the London PM fix for Dec. 13, which was $29.33 per ounce, according to Gordon Hume, the Mint’s deputy director of Public Affairs, multiplied times five, plus the $9.75 Mint premium, for a total cost to the authorized purchasers of $156.40 per coin, or $782 per set.

A-Mark and The Gold Center placed their orders with the Mint for their maximum allocation on Dec. 13, and were subject to the Dec. 14 London PM closing fix, $29.88 per coin, according to Hume. Using the acquisition formula, the $29.88 per ounce fix, times five ounces, plus the $9.75 per coin premium, brings the total individual coin acquisition cost to $159.15, or $795.75 per set.

Still to be added to the totals are the purchasers’ shipping and handling costs.

Mint officials Dec. 10 restricted the authorized purchasers to selling the coins to only the public; they may not sell the coins to secondary market retailers. The authorized purchasers are also banned from selling sets to their employees and relatives. The firms cannot take more than a 10 percent profit over the cost of coin acquisition from the Mint. Sales are limited to one coin of each design per household.

On Dec. 14, the authorized purchasers received another memo from the Mint’s America the Beautiful silver bullion coin program manager, Greg Hafner, announcing that sales to customers outside the United States were prohibited.

“Term 1 in the Authorized Purchaser Agreement states ‘Authorized Purchasers shall make available for sale to the public all 2010 America the Beautiful Silver Bullion Coins that they acquire,’ ” according to Hafner’s Dec. 14 memo. “The intention of this condition is to ensure that all 2010 America the Beautiful Silver Bullion Coins minted and issued by the United States Mint are sold ‘to the public.’ Both references to ‘public’ mean the people of our nation – that is, the American public.”

Six of the authorized purchasers that have already ordered coins have indicated they will be selling the coins strictly as sets, not as individual coins, because higher demand for specific coins could otherwise leave them with less popular issues, according to the firms. Most collector demand is for sets, though, the businesses note.

FideliTrade Inc. is the only purchaser to indicate thus far that it will sell the coins as individual pieces; the firm is limiting sales to one coin per customer and is not selling sets.

The other four authorized purchasers are:

At close of business Dec. 16, Coin World was informed that Dillon Gage planned to place its order Dec. 17 by the 3 p.m. deadlines. Representatives of the other three firms could not be reached for comments.

Some of the authorized purchasers posted notices on their Web site that information would be forthcoming on their sites as to how the five-coin sets would be offered for sale to the public. In some instances, the authorized purchasers indicated to Coin World that they already had sufficient pre-sale inquiries to absorb the maximum allocation of complete sets even before receiving the coins.

Sales start, then are halted

On Dec. 1, the authorized purchasers were informed that they could place orders with the Mint for their maximum allocation on Dec. 6. However, because of complaints from Mint customers that the coins were being sold at 80 to 100 percent over the precious metal melt value, Mint officials on Dec. 6 suspended the program until they could re-examine the terms of sale.

Mint officials informed the authorized purchasers Dec. 9 that the program would be reopened Dec. 10 with new restrictions on sales, with all sales to secondary distributors eliminated.

The authorized purchasers are also concerned about acquiring sufficient packaging to ship thousands of individual coins with no damage during transit to purchasing customers. The firms that sell to secondary distributors rather than to the public had anticipated shipping the coins in the original Mint rolls. ¦