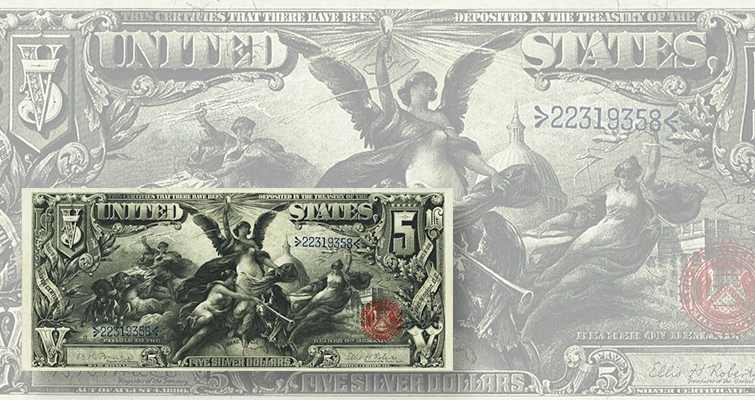 They were the most beautiful federal notes ever issued, vastly more artistic than anything in circulation in the United States today. And they were abject failures, replaced by new designs within two years in response to complaints from bank tellers and the public. 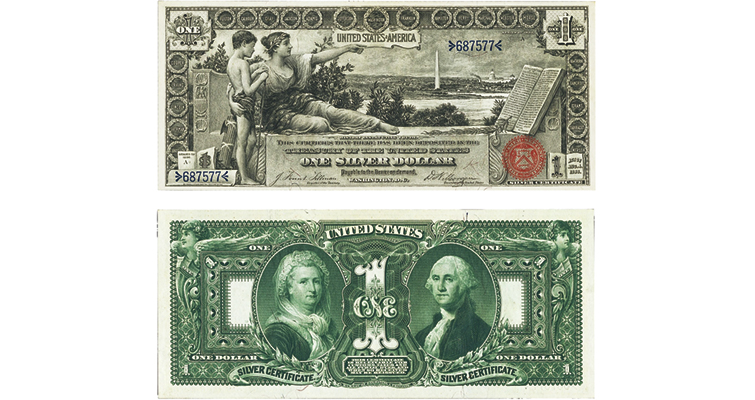 Series 1896 $1 silver certificate pays tribute to American history, with the face featuring the mural History Instructing Youth and the back depicting Martha and George Washington. 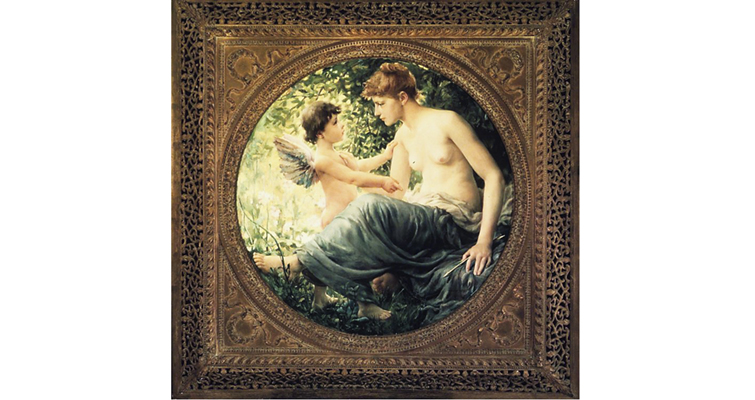 Hints of the origins of the figures of a child and woman in Will H. Low’s mural History Instructing Youth for the 1896 $1 silver certificate can be seen in his 1889 painting Love Disarmed. 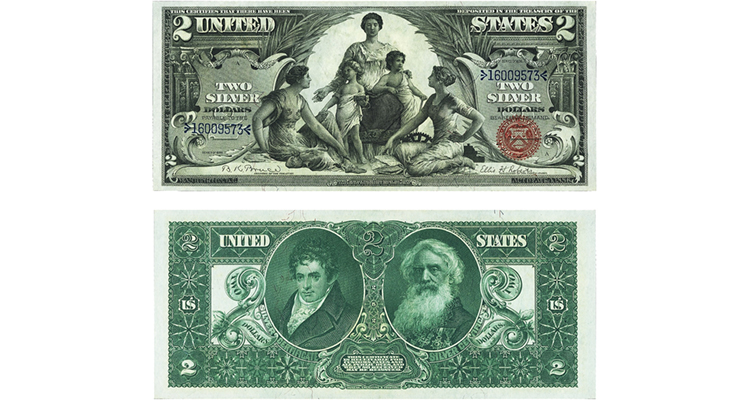 The designs for the $2 silver certificate paid homage to the Industrial Revolution and the roles steam and electric power were playing in industry and commerce. Portraits of inventors Robert Fulton and Samuel Morse continue the theme on the back. 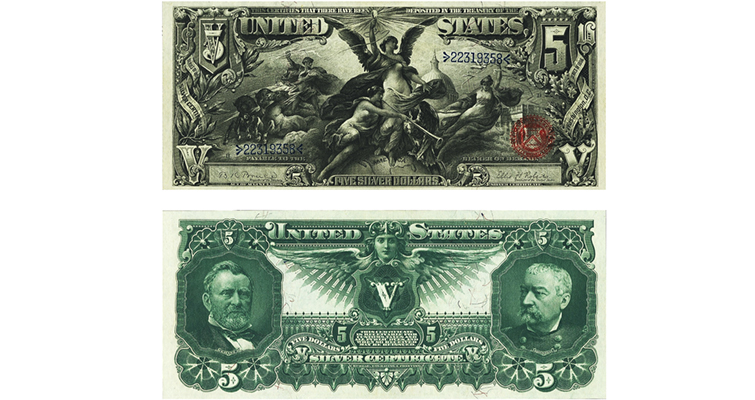 The face of the 1896 $5 note features the figure Electricity at the center, presenting electric light to the world. The figure would be the target of criticism as an “indelicate figure.” 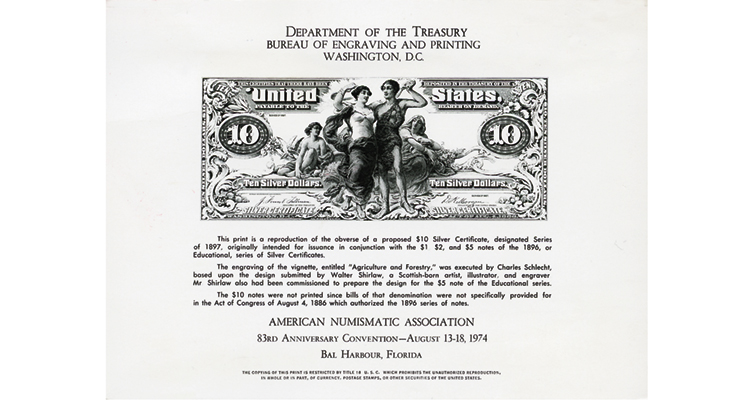 Higher denominations were planned in the 1896 series but never released. This BEP souvenir card depicts the face of the unissued $10 note.

They were the most beautiful federal notes ever issued, vastly more artistic than anything in circulation in the United States today. And they were abject failures, replaced by new designs within two years in response to complaints from bank tellers and the public. They were the Series 1896 silver certificates — the Educational Series of $1, $2, and $5 notes. In a contest between artistry and practicality, art lost.

What happened? Why were notes whose beauty is so prized today replaced so quickly? Blame the mural-style artwork, the “newness” factor, their susceptibility to counterfeiting, unhappy bank tellers, and saleswomen who objected to the “indelicate figures” on the notes. As the New York Times reported in 1897, they were “doomed.”

The effort was noble. Treasury and Bureau of Engraving and Printing officials wanted to raise note design to new heights, much like officials sought to improve U.S. coinage design, starting a decade later. But a number of problems conspired to end the experiment sooner than expected.

When silver certificates were first issued in 1878 in denominations of $10 and higher, the designs used were pretty similar to designs used on notes of other categories in circulation — a portrait vignette to the left or right of the face, a lot of lathework on both face and back, denominational markings. The 1878 designs were utilitarian but hardly beautiful. The decision to replace them with designs of much greater artistic beauty was like the effort a decade later to begin replacing less-inspired coinage designs with designs by Augustus Saint-Gaudens and Alexander Weinman and James Earle Fraser.

By 1893, Treasury Department and Bureau of Engraving and Printing officials had begun talking to artists about the next generation of silver certificate. Sometime before Nov. 1, 1893, researcher Gene Hessler writes, the Treasury Department had selected three muralists to create designs for the new notes. All three men — Will H. Low, E.H. Blashfield and Walter Shirlaw — were established artists, with Low and Blashfield being Paris-trained as painters and Shirlaw also being a bank note engraver. According to Hessler in his U.S. Essay, Proof and Specimen Notes, each was commissioned at $800 per design selected.

The designs for the faces of the new notes would depart from the portrait style used on the existing silver certificates they were replacing. Officials gave the muralists a broad canvas with which to work, deciding, for the notes’ faces, to let each design encompass nearly the entire side of the note. A decision was also made to let the notes adhere as closely as possible to the designers’ original paintings. To do that, the BEP chose not to use lathework on the faces of the notes. According to Hessler, the 1896 silver certificates are the only federal notes issued since 1861 to lack this form of printing. That would become a problem.

For the $1 silver certificate, Low painted a mural called History Instructing Youth. It depicts a seated woman as History, a motherly right hand resting on the hip of a young boy (Youth) standing next to her, while she points with her extended left hand in the general direction of the District of Columbia in the background, the Washington Monument and U.S. Capitol both easily identifiable. She seems to be telling the child about the nation’s history.

Low’s concept for the mural may owe something to an 1889 painting of his called Love Disarmed (now at the Brooklyn Museum). This earlier painting shows a seated and partially nude woman facing a winged little boy, one of her hands resting on the child’s chest. While the execution of the two paintings is different, one can see connections between the two.

The design for the back of the $1 note by the BEP’s head engraver is more traditional in approach, and yet it connects to the face design. It features a great expanse of elaborate lathework with two portraits of Martha and George Washington, the two people most identified as the mother and father of the nation.

A mural by Blashfield, Science Presenting Steam and Electricity to Industry and Commerce, was selected for the face of the $2 note, although it was originally intended for the never-produced $50 note. The title of this painting design clearly suggests a celebration of new industries made possible by the use of steam and electric power. This was the era when the telephone and steam tractors and automobiles and electric lights and motion pictures were all new and wonderful. The newness of Steam and Electricity are made clear in their portrayals as youths, while Science, Industry, and Commerce are all mature women benefitting from their introduction to the new forms of power.

The back of the $2 note, like that of the $1 edition, is more traditional, with lathework surrounding portraits of pioneering inventors Robert Fulton and Samuel F.B. Morse. The selection of these two individuals, pioneers respectively in steam transportation and long-distance electronic communication, are a perfect match for the theme found on the face.

The face of the $5 note portrays Shirlaw’s Electricity Presenting Light to the World. Electricity, a standing figure with wings on her back stands tall, her right hand holding aloft a shining electric light bulb. Other figures lie at her feet or appear in the background — Peace and Electricity, and the Romans’ Jupiter, god of sky and thunder in his chariot, a lightning bolt in one hand.

The design on the back is the most political and the least connected thematically to the face for the series, with portraits of Ulysses S. Grant and Philip Sherman flanking a female head with outstretched wings.

The creation of the designs did not occur without controversy or effort from the BEP’s engravers. T.F. Morris was the chief of the BEP’s engraving division and, like the Mint’s chief engraver a decade later, Charles Barber, he insisted on making changes to the designs to meet the practicality of note production, all detailed by Hessler in his book.

The notes debuted to mixed reviews. While an Aug. 15, 1897, New York Times article acknowledged that the artistry of the notes was well above previous issue, Hessler writes, the innovative approach at design was causing problems on multiple fronts.

Heavy use of black ink on the faces made the notes overly dark and easily smudged. The smudging made them “suspicious with a little use” according to the article. Bank tellers had difficulty telling them apart, as “the number denominations [were] too indistinct for rapid use at the banks,” reported The Washington Times in a May 1, 1897, article. In a comment duplicated a century later after a massive redesign of Federal Reserve notes, the Aug. 15 article in the New York paper noted, “The first objection to them was that they were new.” Also, the notes were targets for counterfeiters, with the lack of complicated lathework on the faces making the job easier for forgers.

Saleswomen reportedly had other objections, and unlike rumored complaints about the first version of the Standing Liberty quarter dollar in 1916 and 1917, Treasury Department records show complaints were actually heard about the notes and action taken to address the concerns, though changes were never implemented before the series was canceled.

Hessler cites a Jan. 25, 1898, letter from an Ellen Collins to the Treasury Department referencing “indelicate figures.”

Collins wrote: “May I respectfully plead that the indelicate figures now in use, especially on the $5 bills, may be avoided. A friend said, she thought them a distinct insult to our sex, and today a saleswoman ... told me that she had girls of her own class, express their distaste to them. Please use all of your influence against what is degrading and to many persons revolting.”

The central figure of Electricity on the mentioned note is partially nude, with most of her torso bared, and the female figure at her feet is similarly unclothed. Hessler illustrates in his book a unique 1897 proof in which clothing is added to Electricity and Peace. Nearly two decades later, the exposed breast of the Liberty figure on the 1916 and 1917 Standing Liberty quarter dollar was covered with a coat of chain mail. Some collectors and writers have implied that censorship was behind this change in design too, but no one has uncovered the same kind of evidence as exists for the 1896 notes. Indeed, other works of the World War I era by quarter dollar designer Hermon McNeil show similar changes, as he garbed female figures with chain mail as the nation prepared for war.

Despite efforts to lighten the darkness of the faces and fix other problems, the criticisms of the three notes were so great that the government canceled work on the $10 and larger denominations and quickly began working on a replacement series. The Treasury secretary promised, “When the next change is made it will be to return to the old style notes — not necessarily to the old designs,” according to Hessler. The Treasury secretary added that “the designs will be so distinctive there will be no difficulty in confusing them.” The replacement Series 1899 notes, while attractive, are not in the same class as the 1896 notes, but they were successful, with the $1 and $5 notes not replaced until 1923. The grand experiment had ended in failure.

Given the beauty and history, it is no surprise that the notes are popular with collectors today.

Well-circulated examples can be found for much less, maybe for $100 to $220, but few collectors would be happy with their purchases and the resale value for the notes would be minimal.

Starting in the late 1960s, the BEP began selling souvenir cards featuring one side of a note from the past, printed from original intaglio plates in their original colors. Over a period of years, the BEP sold cards featuring not only the 1896 designs of the $1, $2 and $5 notes, but also of the unreleased $10 denomination as well.

These gorgeous cards are frequently offered on eBay at Buy It Now prices of $5 to $10. The cards look great and offer collectors on a limited budget an opportunity to own the designs without paying the equivalent of the purchase price of a used or new car.

Creation of the Series 1896 Educational notes was a grand experiment in artistic design that failed. Fortunately, the history still survives through the original notes and the later souvenir cards. Anyone having an appreciation of fine art that also happens to be legal tender should consider collecting this wonderful series. 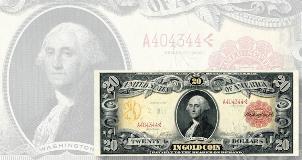