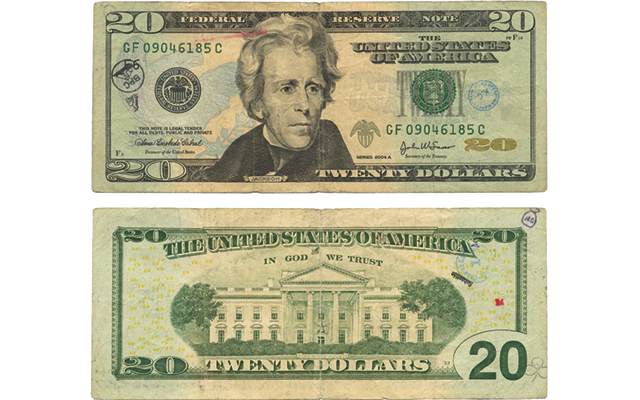 The author received this Series 2004A $20 Federal Reserve note in change. Both the face and back have several stamped initials and symbols. Who stamped them and why remains a mystery.

Editor's note: The following is the fourth of a four-part Coin World series about propaganda notes prepared by Michele Orzano for the July 2014 monthly edition of Coin World.

Something as simple as scribbling a political or social slogan on a piece of cash places the note into the broad category of propaganda notes. That broad category includes everything from deliberate messages to undermine a nation during wartime to using a note look-alike design to catch the eye of a potential customer when advertising a business or service.

So are those high-denomination Federal Reserve notes that sometimes can be found bearing stamped, written or hand-drawn messages part of the propaganda category?

The answer is yes.

An example is the Series 2004A $20 FRN illustrating this article that the author received in change from a purchase at the local Walmart store.

Stamped initials or symbols like those appearing on this note can be found on $20, $50 and $100 FRNs.

Some finders wonder whether these notes are the work of Federal Reserve employees who are imagined to recount all $100, $50 and $20 FRNs by hand after the notes have been machine counted. Some individuals relate a story that employees add a personalized stamp on the top note of their recounted stack to indicate a finished task.

But that explanation was debunked by a spokesperson for the Federal Reserve Board, who told Coin World, “Reserve Bank staff do not hand-count notes or mark the notes.”

People who come across any kind of altered note most often want to know: Is it legal to write on, or draw on, or otherwise embellish FRNs?

The answer to the question involves whether the intent behind adding written words, a drawing or a stamped message is done in an attempt to defraud someone or to deface the note so that it cannot be used in circulation.

The defacing of Federal Reserve notes “is a violation of Title 18, Section 333 of the United States Code,” according to the Bureau of Engraving and Printing website www.moneyfactory.gov.

Under the law, someone who “defaces” a note is defined as “whoever mutilates, cuts, disfigures, perforates, unites or cements together, or does any other thing to any bank bill, draft, note, or other evidence of debt issued by any national banking association, Federal Reserve Bank or Federal Reserve System, with intent to render such item(s) unfit to be reissued,” and adds the warning that such a person “shall be fined under this title or imprisoned not more than six months or both.”

The meanings, if any were intended, of the stampings on the illustrated note remain a mystery.

If you are ready to start collecting something that’s a bit out of the ordinary, keeping your eyes open in the checkout lanes of local stores is one of the easiest ways to begin. And let your friends and family know to let you know if they see something odd.