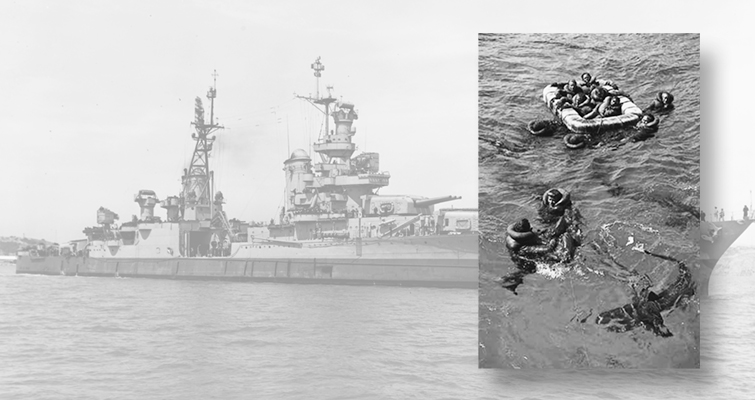 Several hundred members of the crew of the USS Indianapolis lost their lives when the ship was sunk in 1945 by a Japanese submarine. Many of the crewmembers perished in shark attacks after surviving the sinking itself. 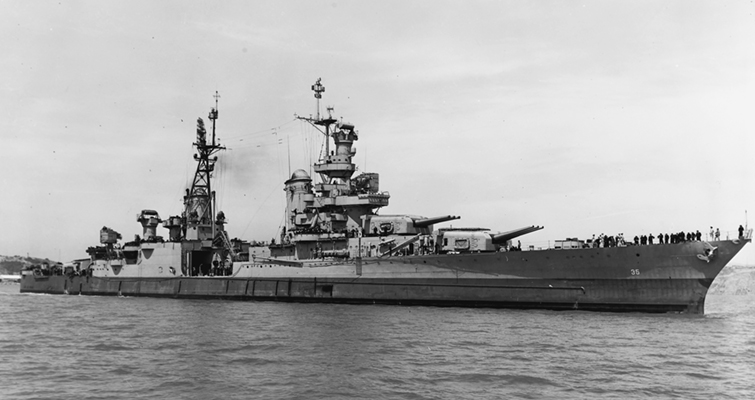 The USS Indianapolis is photographed on July 10, 1945, off the Mare Island Naval Shipyard in California, after the vessel’s final overhaul and repair of prior combat damage. The photo was taken before the ship delivered atomic bomb components to the Island of Tinian. Twenty days after this photograph, a Japanese submarine I-58 sunk the unescorted Indianapolis.

Image from the Bureau of Ships Collection in the U.S. National Archives. 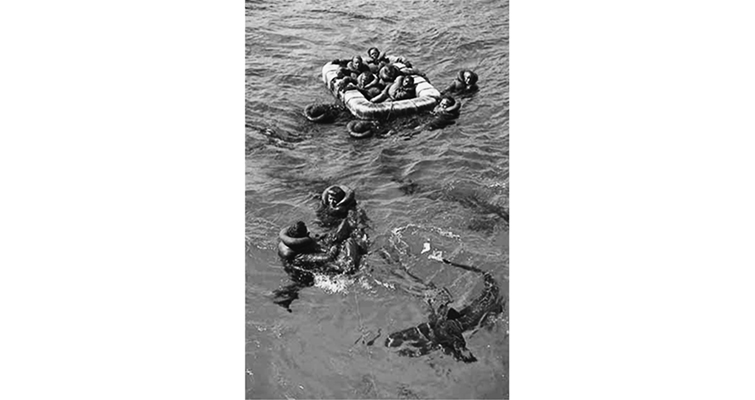 In this recreation image, survivors from the torpedoing of the USS Indianapolis are rescued by an American flying boat known as a Consolidated PBY Catalina, as bull and tiger sharks circle in the ocean around the cruiser’s crew.

Image courtesy of The Dakota Hunter. 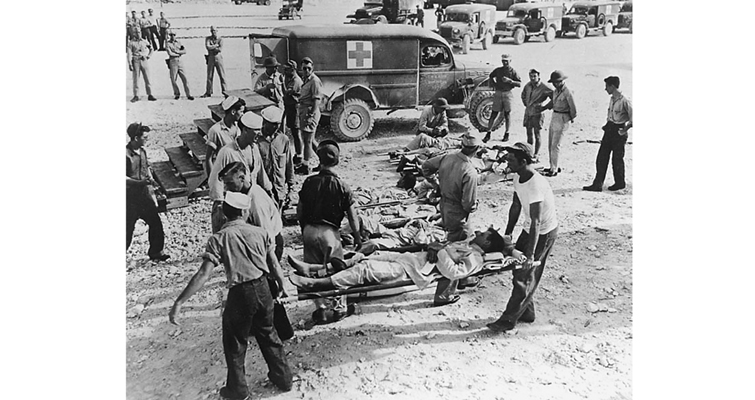 Some of the survivors from the July 30, 1945, sinking of the USS Indianapolis by a Japanese submarine have their injuries treated on Guam.

Image from the U.S. National Archives. 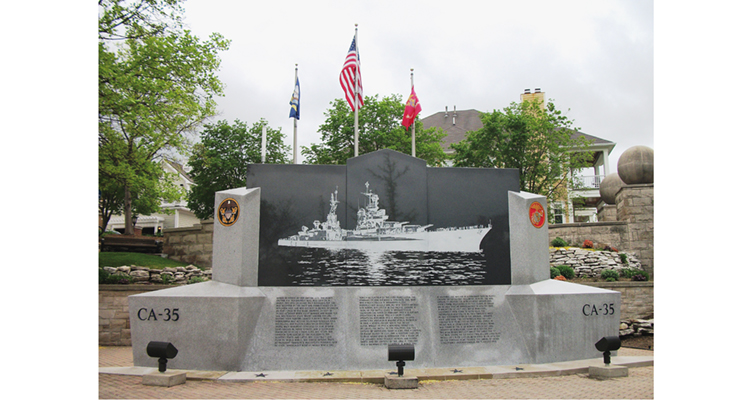 The USS Indianapolis National Memorial is located on the north end of Canal Walk in downtown Indianapolis. Canal Walk is part of the Indiana Central Canal dug in the early 1800s, part of massive 19th century efforts to connect the nation’s interior rivers with its coastal waterways.

Legislation seeking a congressional gold medal to honor the crew of the USS Indianapolis was passed Aug. 1 by the U.S. Senate and forwarded to the House of Representatives for its consideration.

The Indianapolis was torpedoed by a Japanese submarine days after a successful delivery to the Island of Tinian, and sank in 12 minutes. It had delivered components for assembling the atomic bomb dubbed Little Boy, dropped on Hiroshima Aug. 6, 1945.

S.B. 2101 also provides for the Treasury secretary to authorize production by the U.S. Mint of bronze duplicates of the requested congressional gold medal for sale to the general public.

The Indianapolis was launched Nov. 7, 1931, from the New York Shipbuilding Corp. complex in Camden, New Jersey, and officially commissioned Nov. 15, 1932.

The Portland-class heavy cruiser of the United States Navy was named for the city of Indianapolis.

The vessel served as the flagship for the commander of Scouting Force 1 for eight pre-war years, then as flagship for Adm. Raymond Spruance, in 1943 and 1944, while he commanded the Fifth Fleet in battles across the Central Pacific in World War II.

—The USS Indianapolis, commanded by Capt. Charles Butler McVay III, carried 1,195 personnel when it set sail for the island of Tinian on July 16, 1945, to deliver components of the atomic bomb Little Boy. The USS Indianapolis set a speed record during the portion of the trip from California to Pearl Harbor and successfully delivered the cargo on July 26, 1945. The USS Indianapolis then traveled to Guam and received further orders to join Task Group 95.7 in the Leyte Gulf in the Philippines for training. During the length of the trip, the USS Indianapolis went unescorted (because of the covertness of the operation).

—On July 30, 1945, minutes after midnight, the USS Indianapolis was hit by two torpedoes fired by an I–58, a Japanese submarine. The resulting explosions severed the bow of the ship, sinking the ship in about 12 minutes. Of the 1,195 personnel, about 900 made it into the water. While a few life rafts were deployed, most men were stranded in the water with only a kapok life jacket.

—At 10:25 a.m. on Aug. 2, 1945, the fourth day after the sinking of the USS Indianapolis, Lt. Wilbur Gwinn was piloting a PV–1 Ventura bomber and accidentally noticed men in the water who were later determined to be survivors of the sinking of the Indianapolis. Lt. Gwinn alerted a PBY flying boat aircraft, under the command of Lt. Adrian Marks, about the disaster. Lt. Marks made a dangerous open-sea landing to begin rescuing the men before any surface vessels arrived. The USS Cecil J. Doyle was the first surface ship to arrive on the scene and took considerable risk in using a searchlight as a beacon, which gave hope to survivors in the water and encouraged them to make it through another night. The rescue mission continued well into Aug. 3, 1945, and was well coordinated and responsive once launched. The individuals who participated in the rescue mission conducted a thorough search, saved lives, and undertook the difficult job of identifying the remains of, and providing a proper burial for, those individuals who had died.

—Only 316 men survived the ordeal and the survivors had to deal with severe burns, exposure to the elements, extreme dehydration, and shark attacks.

—During World War II, the USS Indianapolis frequently served as the flagship for the commander of the Fifth Fleet, Adm. Spruance, survived a bomb released during a kamikaze attack (which badly damaged the ship and killed nine members of the crew), earned a total of 10 battle stars, and accomplished a top secret mission that was critical to ending the war. The sacrifice, perseverance, and bravery of the crew of the USS Indianapolis should never be forgotten, the legislation concludes.

A team of civilian researchers led by Microsoft co-founder Paul Allen discovered the cruiser’s wreckage Aug. 18, 2017, on the floor of the Pacific Ocean, 18,000 feet below the surface. 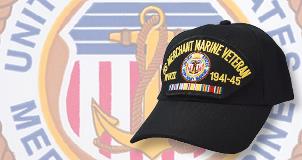 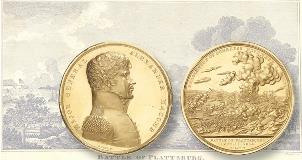 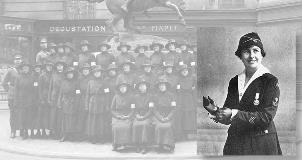