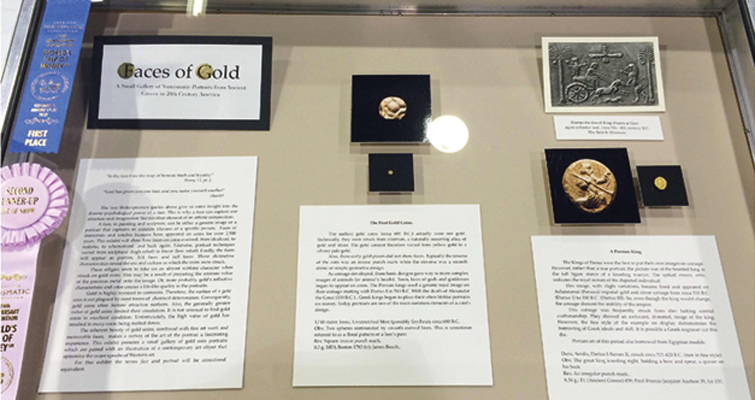 Sekulich’s exhibit looking at portraiture on gold coins won the second-runner-up for best-in-show. Shown is one of the five cases. 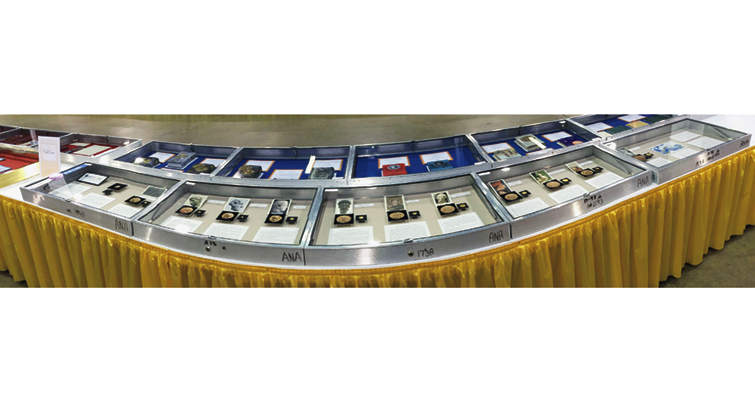 Sekulich’s exhibit looking at portraiture on gold coins won the second-runner-up for best-in-show. A panorama captures the dozen coins displayed in the exhibit across five cases. 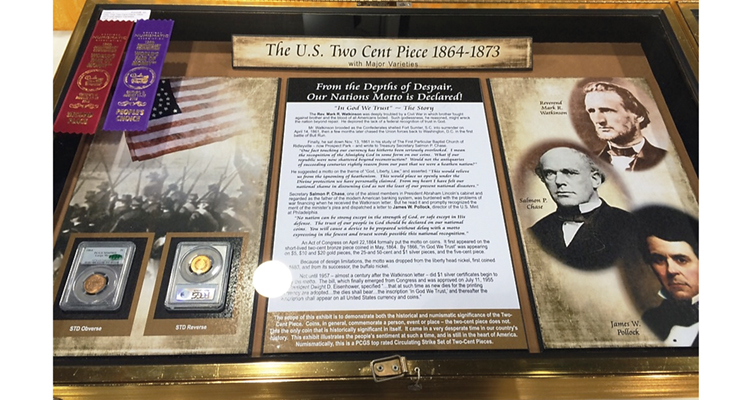 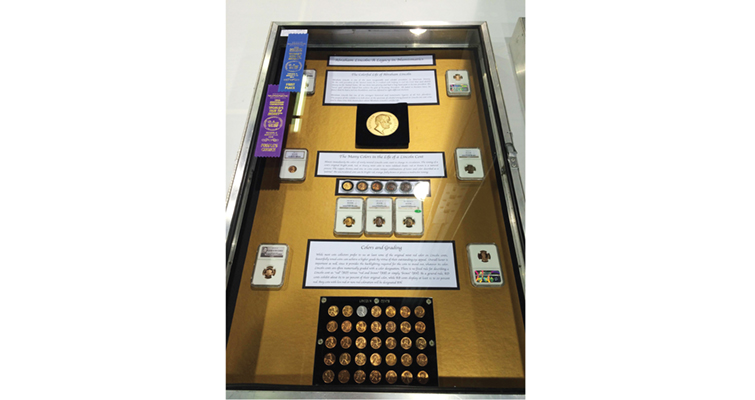 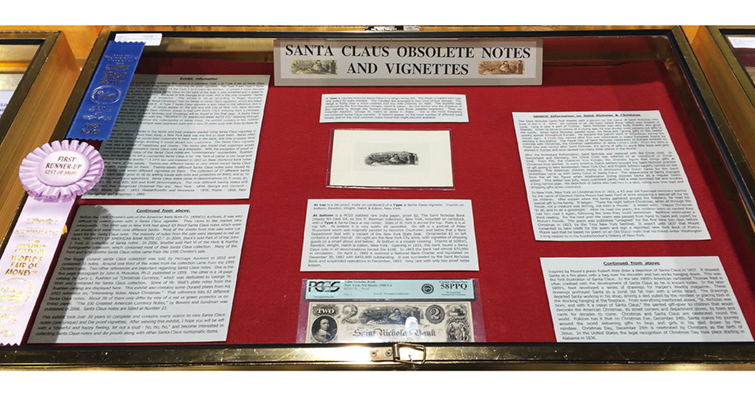 Nancy Wilson’s exhibit on Santa Claus topped her category and was the first-runner-up for best-in-show. 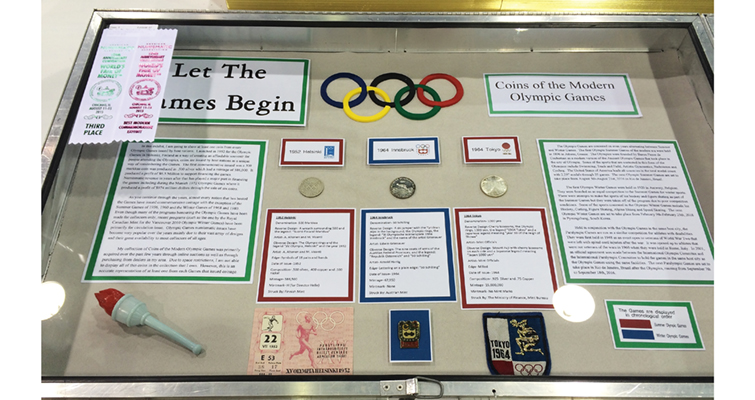 John A.H. Siteman received the Derek Pobjoy Award for Best Exhibit of Modern Circulating Commemorative Coins for his exhibit on coins of the Olympic Games. 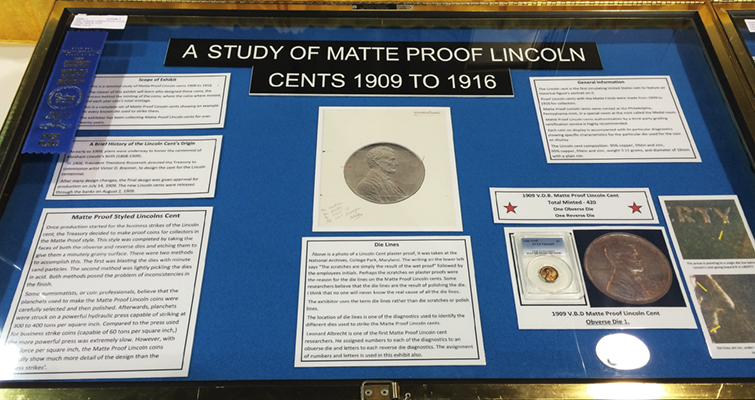 Waltz’s exhibit on Matte Proof Lincoln cents captured several awards at the 2015 ANA show. Shown is the first case of the exhibit. 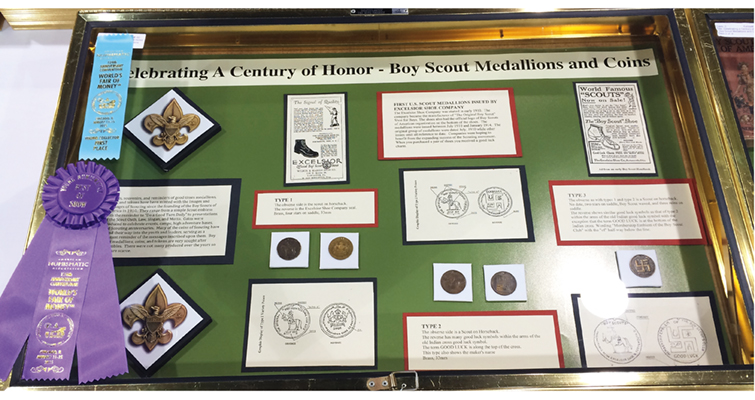 Burseth’s substantial exhibit on the numismatics of the Boy Scouts of America won the Young Numismatist Best-in-Show award at the 2015 ANA show. 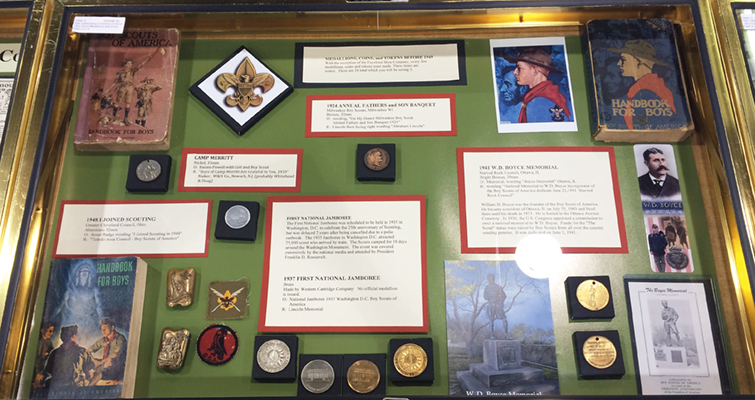 As this case shows, Burseth used a variety of items to convey his theme. 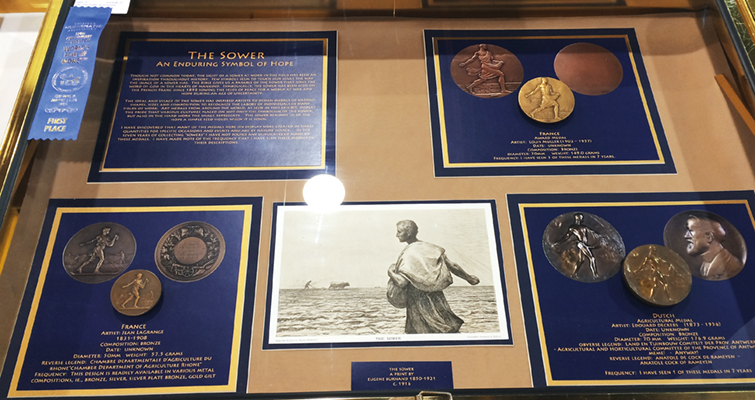 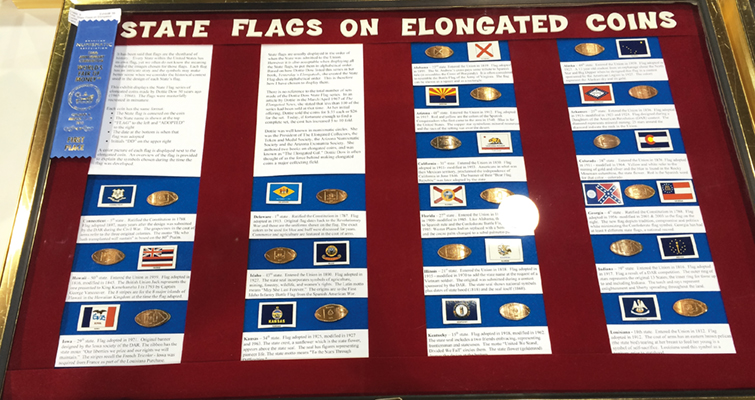 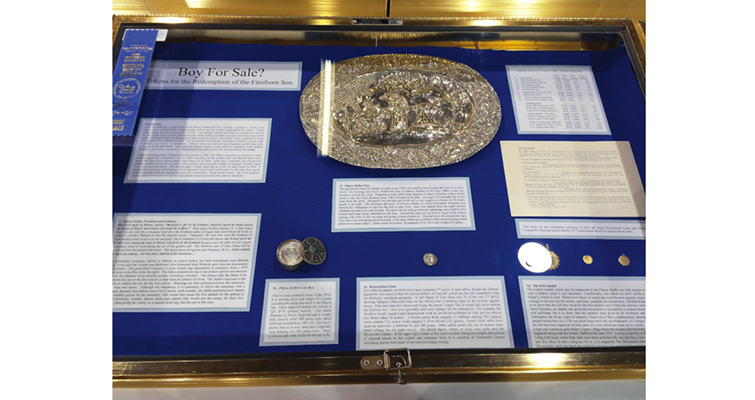 An early 20th century Pidyon HaBen silver tray, similar to those used in the 18th and 19th centuries, features prominently in Simcha Laib Kuritzky’s exhibit “Boy for Sale? Tokens for the Redemption of the Firstborn Son.”
Previous
Next

In this display at the August ANA World’s Fair of Money, Sekulich — who also teaches the exhibiting course at the annual ANA Summer Seminar — presented a survey of coins that use images of flying immortals as symbolic, religious and decorative objects.

These top awards were presented at the banquet on Aug. 14 at the World’s Fair of Money in Rosemont, Ill., which ran from Aug. 11 to 15.

Sekulich also won second runner-up best-in-show honors for his display “Faces of Gold: A Small Gallery of Coin Portraits from Ancient Greece to 20th Century America,” which presented a small gallery of portraits on gold coins that epitomized the major epochs of western art.

When asked about his secret to a good exhibit, Sekulich said that an excellent exhibit takes a lot of time and extensive preparation, paired with a love of sharing knowledge and telling a good story. He adds, “I have found that people who create an educational numismatic exhibit are very passionate about coins as a springboard to numerous related areas.”

The Thos. H. Law Award for the best exhibit by a first-time exhibitor went to Michael T. Shutterly for “Sacred Images: Numismatic Representations of Belief in the Divine,” which also topped Class 9: Coins Issued Prior to 1500 A.D., Dr. Charles W. Crowe Memorial Award.

Shutterly’s exhibit sought to provide examples of how societies and cultures have used coins to express religious beliefs.

He added, “It also provides examples of how a meeting of cultures can cause a group to mint and use coins that express religious beliefs that its people do not hold and perhaps absolutely reject.”

Another of his exhibits, “The Sea & British Patriotism — History of Cayman Island Currency,” won first place in YN Class 3, Paper Money, Kagin Family Award. His exhibit showed how the colorful official currency of the Cayman Islands — introduced in 1972 — reflects the nation’s maritime and cultural heritage.

Finally he won Class 13: Numismatics of Africa and the Middle East, the Menachem Chaim and Simcha Tova Mizel Memorial award, for “Creating Modern Israel: The History of Zionism Shown through Numismatics.”

??Class 14: Numismatics of Asia and the Pacific, William B. Warden Jr. Memorial Award, Floyd Aprill, for “The United States Mint in Manila.”

??Class 17: Numismatic Literature, Aaron Feldman Memorial Award, Mark Wieclaw, for “Roman Coins and Their Values: The Evolution of the Most Used Reference on Ancient Roman Coinage.”