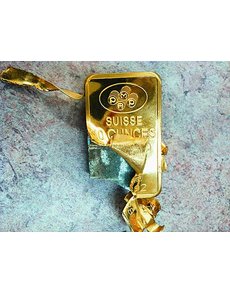 This genuine though altered 10-ounce PAMP Suisse gold bar is one of four sold to a New York precious metals scrap dealer after most of the gold was removed and replaced with tungsten. The altered bar bears legitimate serial numbers. 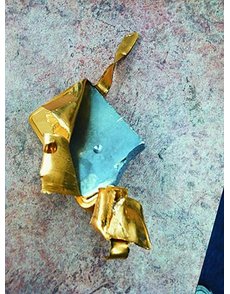 The gold covering the tungsten core of this altered PAMP Suisse 10-ounce bar peels back like the foil that might envelop a bar of chocolate.

Tungsten is close to the same density as gold and is often used in jewelry as an alternative to gold, but is worth only 20 percent the value of the precious metal.

Ibrahim Fadl, owner of Express Metal Refining, 2 W. 47th St., #804, in Manhattan, said Sept. 25 he was duped into buying four of the gold bars from a Russian merchant with whom he had done business before without complications.

The altered bars are genuine bars that bear legitimate serial numbers, but which had been hollowed out and filled with tungsten.

At the time of the purchase, gold was trading around $1,766 per ounce, while tungsten was selling for roughly $360 an ounce. Had they been unaltered, the four bars would have contained gold worth more than $70,000.

Fadl’s case follows an unrelated report of a genuine Metalor 1-kilo gold bar traded in Great Britain that was later found to have had holes drilled into it and filled with tungsten.

Fadl initially had no reservations about buying the four 10-ounce gold PAMP Suisse bars because of his previous business relationship with the seller. Fadl said he made the purchase despite a warning from a fellow dealer to check the legitimacy of the bars after the other dealer was duped with a similar tungsten-filled bar.

After he had already acquired the four bars, Fadl decided to belatedly heed the other dealer’s advice and check the bars’ authenticity. That’s when he discovered the bars he purchased had been peeled open, a block of tungsten inserted, and the bar expertly refinished to hide the deception.

Fadl first reported the forgeries to Manfra, Tordella & Brooks Inc., in Manhattan. MTB is owned by PAMP Suisse, the manufacturer of the gold bars that were altered.

MTB’s chief executive officer, Raymond Nessim, said the fraud with the 10-ounce gold bars was subsequently reported to the Secret Service and FBI. Secret Service officials in New York confirmed they are investigating the forgeries.

Nessim said the seller of the altered bars was known on 47th Street by fellow merchants primarily as a finisher and polisher of jewelry.

Nessim said federal authorities who went to the Brooklyn home of the seller of the altered bars learned from neighbors that he had returned to Russia.

Scattered reports have surfaced within the precious metals industry of large silver bars being altered and filled with tungsten or other nonprecious metals to perpetrate a similar fraud upon unsuspecting buyers.

Back in the late 1980s and early 1990s, Coin World published reports of genuine Engelhard 100-ounce .999 fine silver bars that had been drilled lengthwise and the cavities filled with rods of tungsten. The ends of each hole were capped off with silver to hide the alteration.

The deception was later discovered when the bars were sent for refining and the capped ends popped off while being sent through rolling machinery.