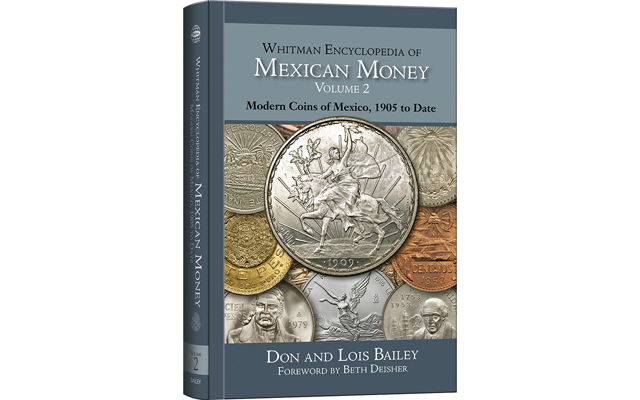 The second volume in a landmark work exploring Mexican coinage history has now been published by Whitman Publishing. 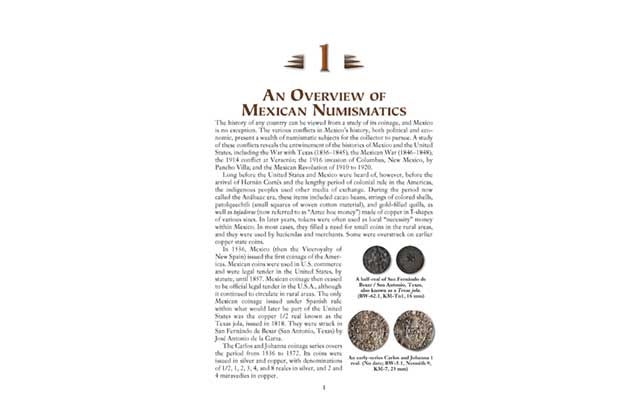 The second volume of the Whitman Encyclopedia of Mexican Money begins with an overview of Mexican numismatics. 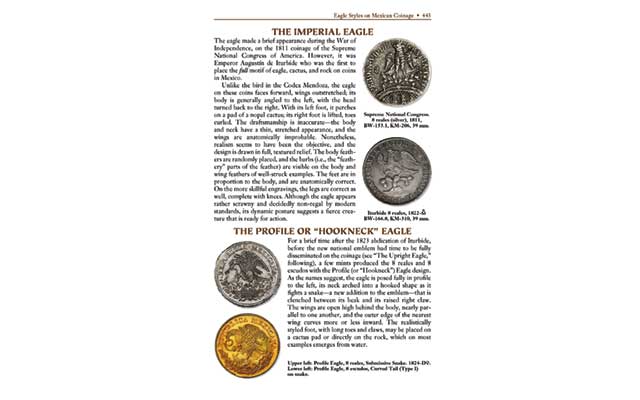 One of the popular coins covered in the second volume of Whitman Publishing's Encyclopedia of Mexican Money is the "hookneck" eagle. 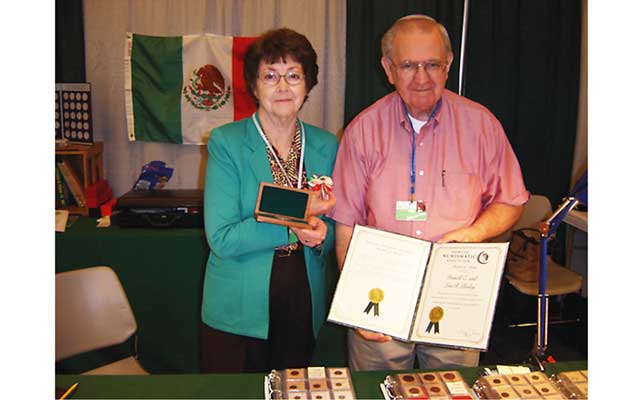 Authors Don and Lois Bailey are husband and wife, but also research and business partners, exploring Mexican numismatics together for some 50 years. 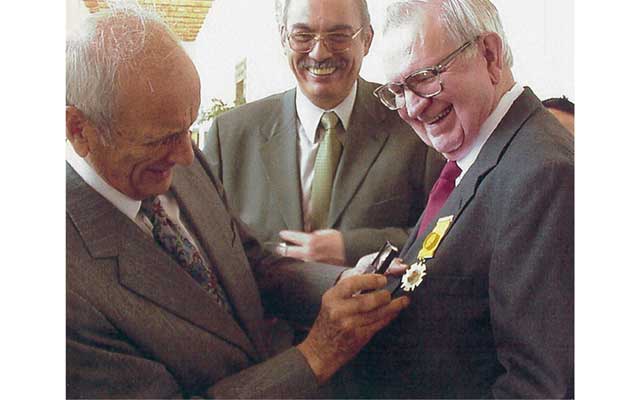 In 2001 Don Bailey, right, received the highest honor from Mexico that may be bestowed upon a foreigner, the Mexican Order of the Aztec Eagle. 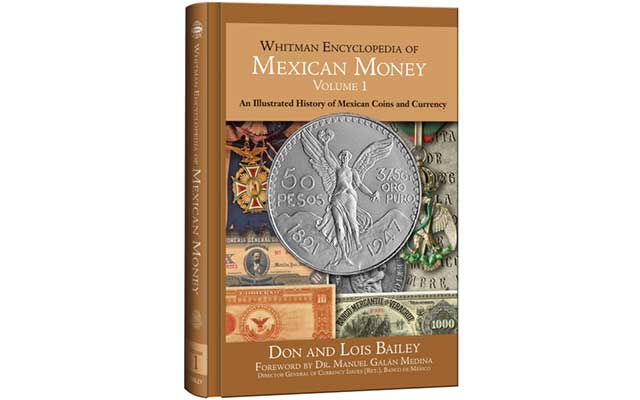 The first volume of the Encyclopedia of Mexican Money was released in September 2014. 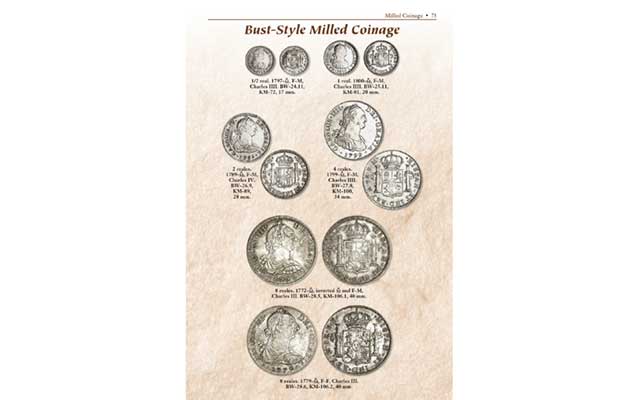 One area of focus in the first volume of the Whitman Encyclopedia of Mexican Money is the very famous, popular Bust-style milled coinage. 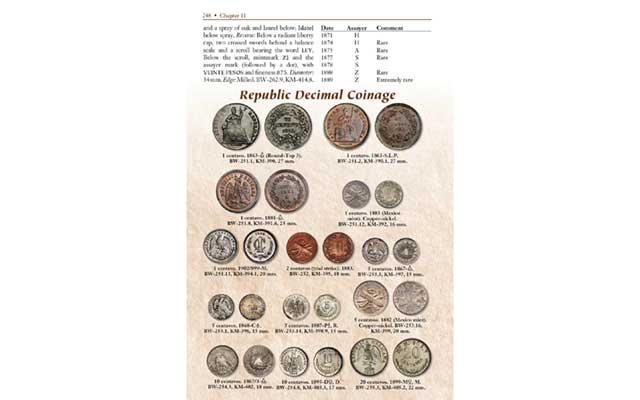 The Whitman Encyclopedia of Mexican Money shows coins at actual size, and lists both the newly developed Bailey-Whitman numbers along with the longtime standard cataloging system.

Anyone who has spoken to retired dealer Don Bailey about his series of books on Mexican numismatics this decade knows that publication has been a long time in coming.

Truth be told, the volumes represent a life’s work, encapsulated in print.

The second volume in the four-book Whitman Encyclopedia of Mexican Money series was released June 30.

The series is authored by the longtime dealer and researcher in Mexican numismatics and his wife Lois. This second volume follows the September 2014 release of Volume 1. This latest emission covers the modern coins of Mexico in depth.

Illustrated essays study the coinage emblems from the Aztec Calendar Stone, the history of design styles of the Mexican heraldic eagle, and many other cultural topics related to Mexican coinage.

The work's other resources benefiting collectors, dealers and historians include bullion-value tables for common gold and silver coins; a glossary of numismatic terms; a bibliography; biographies and histories of important leaders and themes featured on Mexican coinage; and a detailed index.

Beth Deisher, longtime editor of Coin World who expanded the newspaper’s coverage of Mexican numismatics starting in the 1980s, wrote volume 2’s foreword. She calls it “a must-have reference for anyone interested in collecting or investing in modern Mexican coins.”

Bailey and wife Lois were often sighted at major coin shows in the United States and Mexico for decades, before their semi-retirement in 2010.

Other volumes in the series

“The Whitman Encyclopedia of Mexican Money is the only series of its kind: a set of in-depth, richly illustrated, full-color history and price guides for collectors of Mexican coins — a growing field in the hobby,” said Whitman publisher Dennis Tucker.

The first volume of the Encyclopedia is an introduction for collectors and historians — an overview and history of Mexican coinage and currency, illustrated with 1,182 images. It covers pre-Columbian money to the colonial era, the independence movement, revolutions, modern coinage reforms, commemorative programs, and silver, gold and platinum bullion coins.

Additional resources for collectors and researchers included in Volume 1 are charts of the precious-metal content (and resulting bullion values) of Mexican coinage going back to the first milled coinage of 1732; a glossary of terms relevant to Mexican and general numismatics; a bibliography; and an index.

At 496 pages, in a hard cover, Volume 1 includes a foreword by Dr. Manuel Galán Medina, retired Director General of Currency Issues for the Banco de México

Future volumes in the Whitman Encyclopedia of Mexican Money will focus on media of exchange from pre-Columbus days through the colonial period and Republican decimal coinage (Volume 3); and the coins and tokens of the 1910 to 1920 Mexican Revolution (Volume 4). Volume 3 is tentatively scheduled for release in 2016, with Volume 4 projected to follow in 2017.

Born and reared in south-central Michigan, Don Bailey joined the Marine Corps during the Korean War. When he retired from the Marines, he lived in Yuma, Ariz., where he was introduced to the vastly interesting history of Mexico. Don Bailey started collecting U.S. coins in the early 1960s, but soon turned exclusively to Mexican numismatics, concentrating at first on the coinage of Maximilian and the French Intervention.

Since 1979 he has been very active in the Mexican numismatic field as a full-time dealer, attending most of the major coin shows in the United States and Mexico. His wife, Lois, has been his full-time business and research partner.

In 1967, Don Bailey started the Maximilian Numismatic and Historical Society. He published his first article, on the subject of Mexican numismatics, that same year.

Since then he has written on other subjects (including the story of the 1980s forger and murderer Mark Hoffman), but Mexican history and numismatics have always been his focus. He has written articles and columns for World Coin News, Coin World, and other publications, and served as Coin World's “Mexican Trends” analyst.

He has also been a contributor to major references on Mexican numismatics, including the Standard Catalog of Mexican Coins, Standard Catalog of World Coins, and Tokens of Latin America; Frank W. Grove’s numerous volumes on medals, decorations, and tokens of Mexico; and the Guide Book of Mexican Coins, by T.V. Buttrey and Clyde Hubbard, to name a few.

He has worked with the Banco de México and the Casa de Moneda de México to promote their products and numismatic materials, and in 1974 he was appointed to the U.S. Assay Commission.

Don Bailey has been the recipient of the ANA’s Presidential Award, the Sociedad Numismatica’s José Tamborrel Jr. Award (twice), and the Sociedad’s Alberto Francisco Pradeau Award. Numismatic News named him a Numismatic Ambassador in 1980. On Sept. 27, 2001, Don received the Orden Mexicana del Águila Azteca (Mexican Order of the Aztec Eagle), the highest honor bestowed on a foreigner by the government of Mexico.

In June of 1997, Don, Joe Flores, and Sal Falcone organized the United States Mexican Numismatic Association, and Don Bailey served for many years as its executive director and the editor of its quarterly publication, the Mexican Numismatic Journal. The Sociedad Numismatica honored the association with the Dr. Alberto Francisco Pradeau award for promoting Mexican numismatics.

“These 50 years have been a ball. Fifty years of working, if one can use that term, in a field that you really enjoy is all that you can ask. My wife, Lois, is a vital part of the operation. Without her assistance and encouragement the goals we have achieved would have been impossible to reach.”

The books are being printed in Mexico.

Both volumes are available priced at $39.95 each through booksellers and hobby shops nationwide, and online, including from Whitman Publishing.

Collectors may also borrow the book for free as a benefit of membership in the American Numismatic Association, through the Dwight N. Manley Numismatic Library.