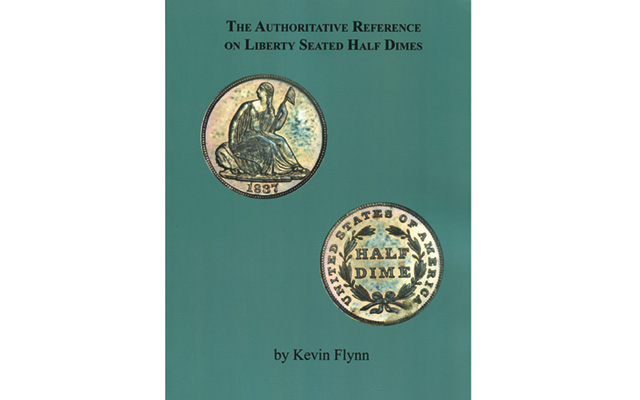 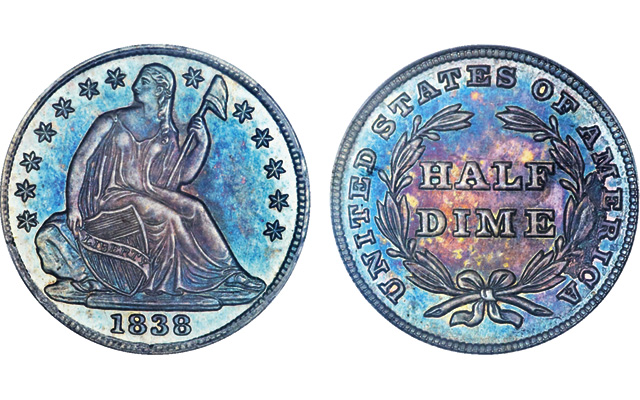 Early Proof Seated Liberty half dimes are particularly enigmatic, as the details behind their production are unclear. This 1838 No Drapery example graded Proof 67 brought $129,250 at Heritage’s Oct. 27 auction of the Eugene Gardner Collection.

Flynn says of the 275-page book, “Its primary purpose was to create a complete and comprehensive reference for the Liberty Seated Half Dimes series including all die varieties, history, hub changes, archive letters, historical documents, and hot topics.”

The Seated Liberty half dime series was struck between 1837 and 1873. Flynn says that the series is accessible for collectors in that the majority of issues are affordable in lower grades.

However, he writes, “If rarity is an important aspect in your collecting endeavors and cost is not an issue, then uncirculated Liberty Seated half dimes are a perfect match.” Flynn suggests looking to issues produced during the Civil War as a particularly challenging collecting area.

An interesting story in the series can be found with the 1870-S Seated Liberty half dime. No 1870-S half dimes were known to have been struck (at least according to the Mint’s Annual Report), but in the late 1970s, a Mint State example turned up in a Chicago coin shop. It last sold at auction in a 2005 Bowers and Merena sale where the unique piece, then-graded Mint State 63 by Numismatic Guaranty Corp., brought $661,250.

Flynn writes, “It is believed that the owner of the coin shop is the individual who properly identified it as a unique coin, and subsequently sold it to Ed Milas of Rarcoa Coins.”

While acknowledging the mysterious circumstances accompanying both the coin’s production and its subsequent discovery, Flynn asks, “How could coins like the 1870-S half dime be unknown for over 100 years?” Flynn’s book provides detailed analysis of the facts regarding the 1870-S Seated Liberty dollar and half dime and Indian Head gold $3 coins, as connecting the three rare issues helps readers get a broad picture of the evidence and may assist in drawing conclusions.

Among the interesting varieties are seven different doubled dies, with the 1872 Seated Liberty Doubled Die Obverse half dime — classified as DDO-001 — “being the most dramatic and not that difficult to locate.” Flynn also lists 12 different overdates, and a dozen different misplaced dates where the digits of the date are punched either in the dentils or the design elements.

A section on early Proof Seated Liberty coins notes that one of the mysteries of the various Seated Liberty series is how many Proofs were struck at the Philadelphia Mint before 1858. Flynn writes that no Proof silver coins are listed as officially struck by the U.S. Mint between 1837 and 1857, and Proofs are absent from Annual Reports of the director of the Mint. Further, in his research, he has discovered no records at the National Archive that list Proofs struck during these years.

Finally, Flynn notes that the series is interesting from a type perspective, with the author categorizing seven different obverse types and three reverse types. An authentication section is provided, as an archive of documentary material.