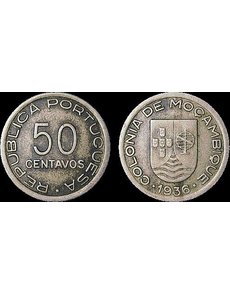 This copper-nickel 1936 50-centavo coin of the Portuguese Colony of Mozambique was found in a roll of U.S. quarter dollars. Searching through rolls of the coins has been more fun since the start of the State quarter dollars program.

Searching through rolls of quarter dollars is always a lot of fun.

Since the advent of the Washington quarter dollar, State reverse series in 1999, it has become much more interesting to look at the many varieties of quarters that can be found in rolls.

The 10-year State quarter dollar series was followed in 2009 with five Washington quarter dollars honoring the District of Columbia and five territories of the United States. And now the America the Beautiful quarter dollars program is in progress; the program began in 2010 and will continue through 2021.

Yet with all the quarter dollar designs to be seen, some coins found in rolls will still stand out from the rest as being quite unusual and particularly remarkable.

For example, I recently found a 1936 50-centavo coin of the Portuguese colony of Mozambique in a roll of quarter dollars. This was a one-year type coin.

The coin is composed of copper-nickel and has a mintage of 2.5 million pieces. I researched the coin and was pleasantly surprised to discover that an example in its current condition can sell at the $20 level.

The reverse design depicts the provisional coat of arms of Portuguese East Africa, a common alternate name for Mozambique at the time.

The provisional coat of arms consisted of a tierced shield (divided into three sections) with the Portuguese quinas (five shields arranged in the shape of a cross) on the left and a golden armillary sphere (a model of objects in the sky) on the right. Below those two elements, are waves of the ocean.

The waves are a good representation of the fact that Mozambique stretches for more than 1,400 miles along the southeast coast of Africa.

Portuguese explorers began arriving in the area in the late 15th century. By 1907 the area became a colony of Portugal and then an overseas province in 1952.

From the early 1960s to 1974, Mozambique fought for independence. It won an agreement with Portugal to become independent on June 25, 1975.

Throughout the 1970s through the early 1990s the People’s Republic of Mozambique was plagued with civil war.

A new constitution enacted in 1990 provided for free elections based upon a multiparty political system as well as a market-based economy. These changes ultimately resulted in the end of the civil war in October 1992.