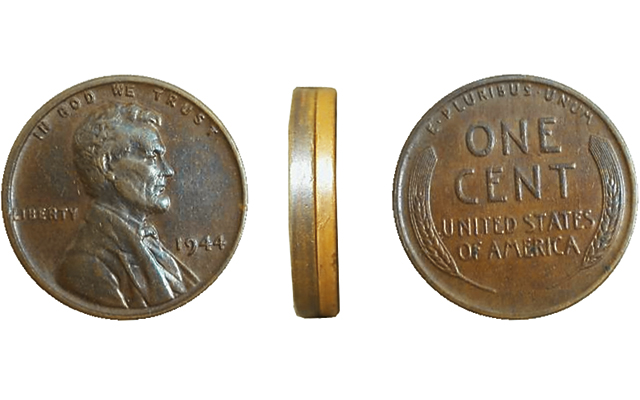 This overweight (more than 4.1 grams) 1944 Lincoln cent was once thought to have been struck on an experimental thick planchet. It is now more reasonably classified as a rolled-thick error. The center photo shows an edge-on comparison between the thick cent and a normal copper-alloy cent. 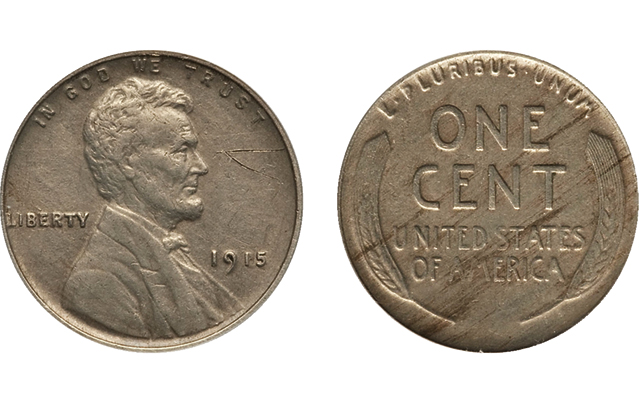 This 1915 cent was struck on a slightly heavy copper-nickel planchet. Once considered a possible experimental planchet, it is now widely regarded as a conventional off-metal error (a foreign planchet or, less likely, foreign stock). 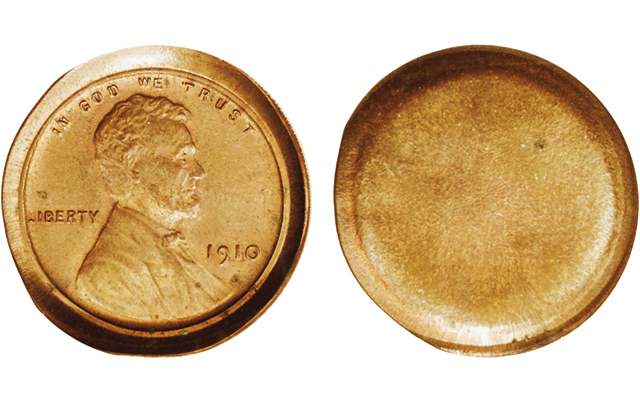 This 1910 cent is currently listed as a uniface test strike. However, its appearance is indistinguishable from a uniface broadstrike — a striking error. The coin’s actual color is much darker than the photo indicates.

Every so often a coin is struck on a planchet whose specifications deviate markedly from those of a normal coin. A small minority turn out to be legitimate test planchets while the rest have more prosaic explanations. The trick is to discriminate between these two possibilities and resist the temptation to choose the most exotic (and profitable) scenario.

For decades, these hefty 1944 cents were identified as having been struck on experimental planchets. Overweight 1944 5-cent coins received the same treatment. Nowadays both populations are widely considered by the entire numismatic community to be Mint errors, although the cent is still listed, with reluctance, at uspatterns.com as P2078. The overweight cents and 5-cent coins are now more sensibly classified as having been struck on planchets that were punched out of normal stock that was rolled too thick.

It shouldn’t have taken so long to demote these overweight coins. Equally heavy cents and 5-cent coins occur in many other years. The idea that the federal government would even contemplate such an experiment in the middle of World War II is ludicrous. Copper was a critical war material that needed to be conserved.

Also once suspected as being struck on an experimental planchet is the illustrated 1915 Lincoln cent. It is slightly overweight at a reported 3.2 grams and is composed of 75 percent copper and 25 percent nickel (Coin World, June 10, 2002). It has since been reclassified by most authorities (including uspatterns.com) as a conventional off-metal error, possibly on a planchet for a Cuban 2-centavo piece, a coin the U.S. Mint was producing at the time. It could also be an orphan off-metal error of unknown origin (mystery planchets appear in many years).

While the Cuba 2-centavo coin officially weighs 3.5 grams, notable variation in weight is seen among coins and planchets produced for other countries during this general time period. For example, the Argentina 10-centavo coin — whose copper-nickel planchets were produced by the U.S. Mint from 1919 to 1920 — shows significant variation (in my personal observation). It is also true that the Cuba 2-centavo coin measures 19.3 millimeters in diameter rather than the 19.05 millimeters that is standard for the U.S. cent. But the Cuban blank would have been smaller before the strike, and even if it had been wider than a cent blank and a cent collar, its passage through the cent upsetting mill would have reduced its diameter to a size that would fit into a cent collar.

The 1915 cent shows a poorly mixed alloy with streaks that are especially noticeable on the reverse face. It’s unlikely that an experimental planchet would be so sloppily fabricated. That streakiness is very common on the previously mentioned Argentina 10-centavo planchets is perhaps telling.

Finally, there would seem to be no point to creating a nickel-colored planchet, since the coin would be easily confused with contemporary dimes and 5-cent coins at a time when copper was cheap and abundant.

Our last example, a 1910 Lincoln cent, is currently encapsulated and labeled as a uniface test strike. It is classified as JA1910-1/P3528 by uspatterns.com, although with some caveats. I think the caveats are warranted and should be elevated to serious doubt. The coin’s weight has never been reported and may be the same as a cent (its color is certainly the same). While the planchet has been described as “slightly larger than normal,” I don’t see any basis for this conclusion. The coin was struck out-of-collar and the portion of the coin lying beyond the die-struck obverse design shows obvious radial striations all around. This would indicate that the planchet was originally no wider than the die face and that the unstruck perimeter squeezed out from beneath the die during the strike.

The available evidence indicates that this is probably a uniface broadstrike. In other words, a cent planchet was struck on top of another cent planchet while neither was confined by the collar.