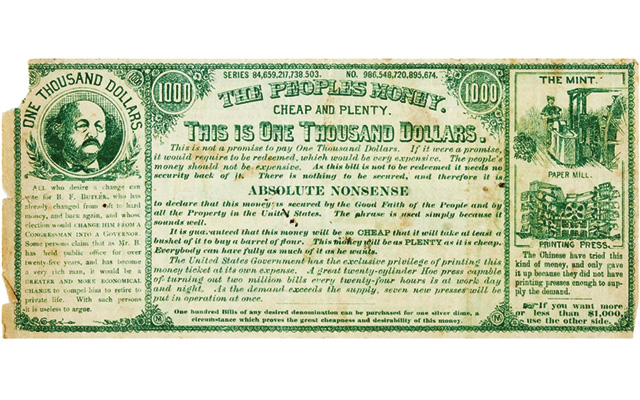 A drawing of Benjamin F. Butler appears on this satirical "$1,000 note" used by Butler opponents during one of his unsuccessful campaigns for governor of Massachusetts.

The “$1,000 note” satirizing a Massachusetts politician from the late 1800s sold in a Nov. 26 Weekly Internet Rare Books and Autographs auction conducted by Heritage Auctions.

The 3.5-inch by 7.75-inch piece known as “The Peoples Money” was printed with green ink. It mocked one of Benjamin F. Butler’s many bids to become governor of Massachusetts.

Part of the text on the piece reads, “All who desire a change can vote for B.F. Butler, who has already changed from soft to hard money, and back again, and whose election would change him from a congressman into a governor. Some persons claim that as Mr. B. has held public office for more twenty-five years, and has become a very rich man, it would be a greater and more economical change to compel him to retire to private life. With such persons it is useless to argue.”

Maj. Gen. Benjamin F. Butler was best known as “Beast Butler” by the citizens of New Orleans during the Civil War. Butler was in charge of Union occupying forces in that city and his administration caused quite a stir among Confederates and Union supporters alike.

He was known for issuing the infamous Order 28, which stated any lady in New Orleans that showed contempt for Union soldiers would effectively be treated as though she was a prostitute.

His “reign” in New Orleans was blessedly short — May to December 1862. A series of military failures followed and he resigned his commission in November 1865.

Before his military service Butler had served in the Massachusetts House and Senate. He was elected governor of his home state in 1882 and was a presidential candidate in 1884.