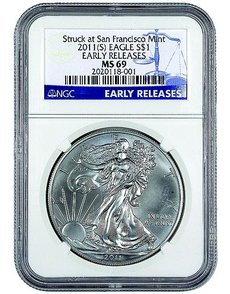 2011 American Eagle silver bullion coins meeting specific standards will be eligible for NGC grading and encapsulation with a grading insert designating the coin as an early release and struck at the San Francisco Mint. 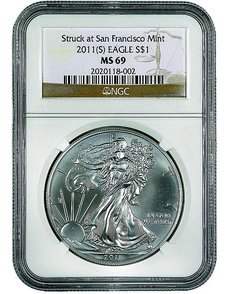 PCGS will encapsulate the first coins released with grading inserts signifying each coin as a FirstStrike. After the 30-day period, the coins will be encapsulated with a PCGS standard blue insert, but still indicating the coin is a San Francisco Mint strike. 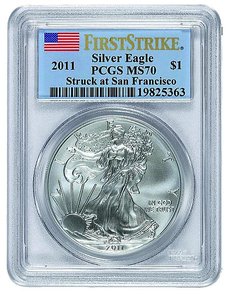 2011 American Eagle silver bullion coins meeting specific standards will be eligible for NGC grading and encapsulation with a grading insert designating the coin as an early release and struck at the San Francisco Mint.

The major grading services are grading and encapsulating 2011 American Eagle bullion silver coins struck at the San Francisco Mint with special grading inserts designating the coins as having been produced at the facility.

The grading services will be so designating only coins that are delivered to them in the sealed 500-coin boxes, as originally received by the U.S. Mint’s authorized purchasers, since labels on the shipping boxes will be the only indication the coins were struck by the San Francisco Mint.

None of the coins struck at either facility bear the S or W Mint mark designating the Mint of manufacture. U.S. Mint officials said the strikes from the San Francisco Mint will be identical to those produced at the West Point Mint, since they will be produced on identical planchets, on identical presses and under the same production conditions.

Numismatic Guaranty Corp. (www.ngccoin.com) in Sarasota, Fla., is certifying coins from the sealed 500-coin boxes received during the 30-day period starting June 3 with grading inserts designating the coins as “Early Releases,” according to Janell M. Armstrong, marketing coordinator for NGC’s parent entity, Certified Collectibles Group. The insert will also include the phrase “Struck at San Francisco Mint” and the date reflected as 2011 (S), with the Mint mark in parentheses, since the coins are struck sans Mint mark.

After the 30-day period, coins received by NGC in boxed submissions will be encapsulated with a gold-banded label without designation as Early Releases, but still carry the remaining identifying information as a San Francisco Mint product.

Professional Coin Grading Service (www.pcgs.com) in Newport Beach, Calif., will be encapsulating the coins from the sealed 500-coin boxes it receives during the 30-day period that began June 3 with grading inserts designating each coin under its FirstStrike program.

After the 30 days, bulk coin submissions will be encapsulated with the standard blue PCGS label, but still carry the designation “Struck at San Francisco.” The date in both instances is recorded on the label as 2011, without an S Mint mark in parentheses, according to Miles Standish, PCGS vice president and senior grader.

Michael Fahey, senior numismatist at ANACS (www.anacs.com) in Denver, said June 7 that the grading service will encapsulate bulk submissions from the sealed 500-coin boxes and designate the coins with grading inserts as being San Francisco Mint strikes, although he did not have specifics on what the insert will look like. Fahey said the insert will likely also include the Mint mark with the date to appear as “2011 (S).”

Randy Campbell, senior grader at Independent Coin Graders (www.icgcoin.com) in Tampa, Fla., said June 7 that the firm will likely grade bulk submissions, but the management of the grading service will have to make the final decision.

The grading services will not use grading inserts to identify coins struck at the West Point Mint. The West Point facility’s production will comprise the bulk of the U.S. Mint’s overall 2011 American Eagle silver bullion coin production. U.S. Mint officials have not yet disclosed the number of 2011 American Eagle silver bullion coins that the San Francisco Mint will strike.

From 1989 through 2000, the silver bullion coins were struck at both the West Point and San Francisco facilities, with production moved exclusively to the West Point Mint beginning in 2001. ¦