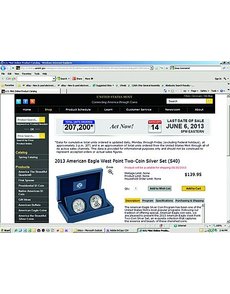 The U.S. Mint posts cumulative West Point Two-Coin Silver set sales totals Monday through Friday on its website via a sales odometer. A computer screen capture shows the total posted at 3 p.m. May 23.

With just two weeks of sales recorded as of May 23, the total number of 2013 American Eagle West Point Two-Coin Silver sets sold reached 207,200.

The Mint is placing no household ordering limits. Mintage will be determined by the number of sets successfully ordered without being canceled by either the customer or the Mint.

The set is being issued in recognition of the 75th anniversary of the West Point structure as a Bureau of the Mint facility. The facility opened in 1938 as a silver bullion depository and was elevated to full Mint status as a production facility in 1988.

On the obverse of the Enhanced Uncirculated coin, the mountains, the red stripes and blue part of the United States flag, the year, and Liberty’s sandals have an Uncirculated finish. The remaining elements and lettering on the obverse have a heavily frosted finish.

On the reverse of the coin, the ribbon in the eagle’s beak, the arrows and olive branch, the alternating stripes in the shield and the border around the shield have an Uncirculated finish. The lettering and other design elements on the reverse have the heavily frosted finish.

The fields on both sides of the coin have a lightly frosted finish.