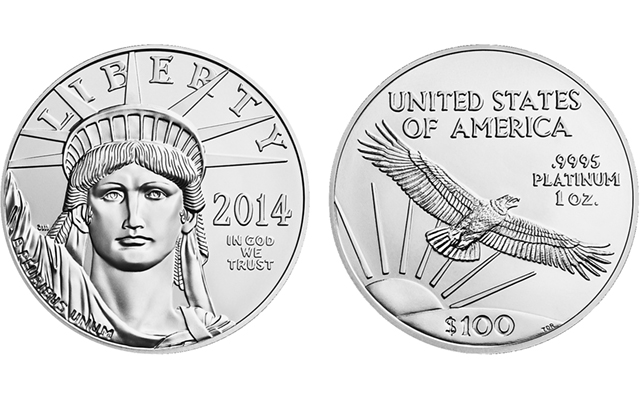 After 10,000 American Eagle 1-ounce platinum bullion coins were sold by the U.S. Mint in March (following a five-and-a-half-year interruption in production), April sales dipped to 1,200 coins.

Demand for American Eagle 1-ounce platinum bullion coins dropped off considerably in April after their return in March following a five-and-a-half-year hiatus.

In general, gold sales are down from 2013 levels.

Continued demand remains for the America the Beautiful 5-ounce silver quarter dollars in 2014, but not at the record levels set for some issues in 2011.

November 2008 was the last month the U.S. Mint sold American Eagle platinum bullion coins to its authorized purchasers before indefinitely ending sales. Sales during that month were restricted to 800 of the 2008 half-ounce $50 coins.

When sales of American Eagle platinum bullion coins resumed in March 2014, sales were restricted to the 1-ounce $100 face value coins only. As noted, sales totaled 10,000 coins in March, but dropped to 1,200 coins in April.

No additional platinum coins had been sold through May 6.

Sales averaged 4,617,375 for each of the first four months, putting calendar year sales on a path toward surpassing the 55-million-coin mark should that monthly sales average hold.

January 2013’s sale of 7,498,000 coins is the highest monthly sales total since the American Eagle silver bullion coin was introduced in November 1986.

Through May 6, sales reached 26,500 for the 2014 Great Smoky Mountains National Park 5-ounce silver bullion coins. The maximum authorization is 40,000 coins.

Mintage limits fluctuate for each issue, according to United States Mint officials, based on projected demand.

The highest sales for the program are the 126,700 coins each for the 2011 Gettysburg National Military Park and Glacier National Park coins.

While the maximum mintages of 33,000 for each of the five 2010 coins were sold out, the mintages for the inaugural year were restricted because of a late start in production at the Philadelphia Mint.

The annual America the Beautiful silver coins are the largest bullion coins sold by the United States Mint.

How bullion coins are sold

The U.S. Mint does not offer the bullion coins directly to the public. The Mint instead sells the bullion coins to a network of authorized purchasers, who acquire the coins from the Mint for the spot price of the precious metal on a given day on the London metals market, plus a small premium.

The authorized purchasers may then sell the bullion coins to dealers and the public.

Monthly, cumulative sales totals can be found on the U.S. Mint’s website.