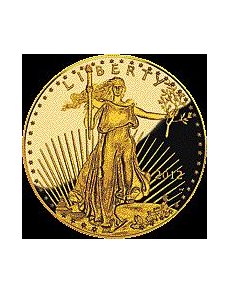 The coins will be offered in five ordering options — individual 1-ounce $50, half-ounce $25, quarter-ounce $10 and tenth-ounce $5 coins, and in a four-coin gold Proof set.

Product ordering options and mintage limits are outlined in the accompanying table.

The single coin options and four-coin set will be priced in accordance with the Mint’s pricing structure for precious metals products.

The initial pricing for the release will be announced April 18.

The pricing of each product will be evaluated weekly and could increase, remain the same or be reduced, depending on the weekly average of the spot price of gold according to the London P.M. fix.

Orders will be accepted at www.usmint.gov/catalog, at 800-872-6468 and at various United States Mint sales centers.

A shipping and handling fee of $4.95 per order will be added to all domestic orders.