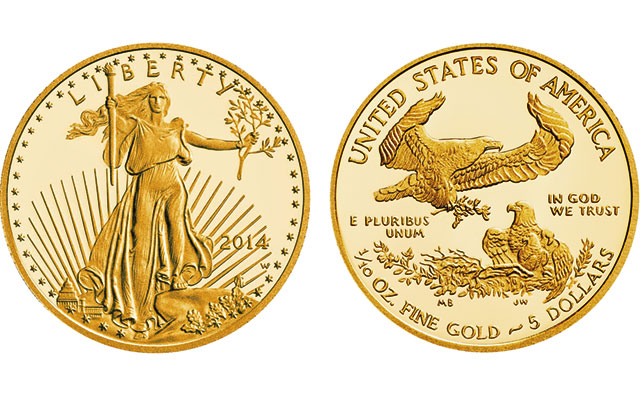 Sales by the United States Mint of Proof 2014-W American Eagle tenth-ounce gold $5 coins and the four-coin gold Proof set are lagging behind those recorded for the 2013-W issues.

The individual Proof 2014-W American Eagle 1-ounce gold coin is no longer available. With a single-coin maximum product authorization at 20,000 coins, the last unaudited sales figures when the option became no longer available in late August was 19,853 coins.

According to the Mint’s latest sales report through Oct. 26, sales for the remaining Proof 2014 -W American Eagle gold coin options, the maximum mintage, and the latest retail price are:

Sales for Proof 2013-W American Eagle gold coins are final, but have not been fully audited, since sales continued into the 2014 calendar year and the program has not been totally reconciled.

The last sales figures reported for 2013, followed by the maximum product authorization, are:

Proof 2014-W American Eagles can be struck through Dec. 31, with sales carried over to calendar 2015 with remaining inventory.