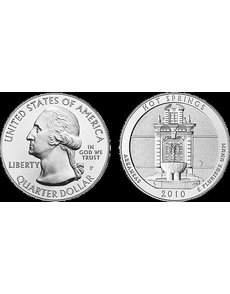 The U.S. Mint expected its 27,000 Uncirculated 2010-P Hot Springs National Park 5-ounce silver bullion coins to be sold out sometime April 29 after this issue of Coin World went to press.

Sales by the United States Mint were brisk beginning at the start of sales at noon Eastern Time April 28 despite problems with the Mint’s online ordering system, which had been anticipated.

Both the Mint’s website at www.usmint.gov and the contracted telephone ordering fulfillment center in Indiana at (800) 872-6468 were flooded with orders from customers seeking the 27,000 coins available. The coins were offered at $279.95 each, plus a $4.95 shipping and handling fee, with a restriction of one coin per household.

The price was to remain in effect during at least the first week of sales, after which Mint officials would evaluate whether to change the price, as long as coins remained available.

The Hot Springs coin represents the first of five Uncirculated 2010-P 5-ounce silver numismatic coins to be offered under the America the Beautiful coin program.

The Mint planned to accept more orders than the number needed to exhaust the maximum mintage for the Hot Springs coin, with the excess orders placed on a waiting list. Orders from customers on the waiting list are to be filled in the order in which they were placed should any earlier orders be canceled and coins become available.

Many collectors who logged into their accounts on the Mint website minutes before the opening of sales April 28 found the system sluggish once sales began. About an hour after sales began, the Mint’s online catalog was shut down and replaced by a notice recommending customers call the toll-free telephone number instead in order to place any order.

Tom Jurkowsky, director of the U.S. Mint’s Office of Public Affairs, said early April 29 that the Mint’s website performed as officials had anticipated.

“In the first hour, we received just over 6,000 web orders,” Jurkowsky said. “Unfortunately, the website went down shortly after 1 p.m. Eastern Time, but service was restored in about 45 minutes. The web then resumed taking orders in its normal capacity of 120 to 150 orders per minute. We experienced a heavy volume of traffic throughout the entire afternoon. By 9 pm Eastern Time Thursday evening [April 28], we had taken more than 19,000 orders.”

As noted earlier, three hours later, the sales total was 20,426 pieces, according to Jurkowsky.

The entire mintage of 27,000 coins for each Uncirculated 2010-P America the Beautiful 5-ounce silver coin was struck during the fall of 2010 at the Philadelphia Mint, with sales delayed until calendar year 2011.

The same ready-to-strike planchets as for the bullion coin versions were also used for the Uncirculated numismatic versions.

The 3-inch planchets for the bullion coins are delivered already having been upset on the rim, annealed (softened through heat treatment) and sonically cleaned.

The ultrasonic cleaning to the planchets helps eliminate buildup of debris on the coinage dies that would require a halt in production for cleaning or replacement of dies, according to U.S. Mint spokesman Michael White.

However, unlike the bullion coins, the numismatic coins received a “vapor blasting” technique after striking, resulting in a finish replicating that used on 3-inch bronze Mint medals, according to White.

U.S. Mint officials have not disclosed when the Mint plans to offer the remaining four Uncirculated 5-ounce silver 2010-P America the Beautiful coins or the five 2011-P coins. ¦