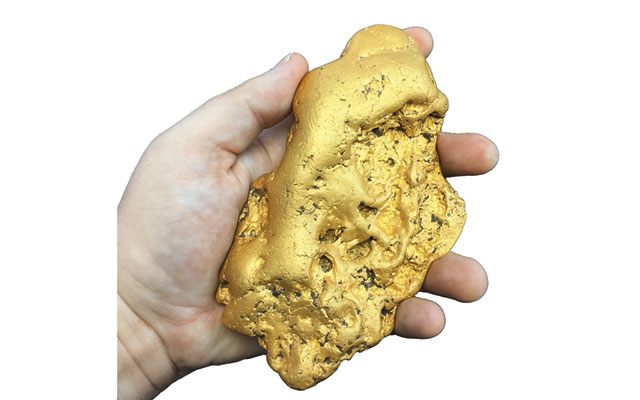 Within a matter of days of becoming public, a gold nugget weighing more than 70 ounces found by an anonymous individual was sold to an unidentified buyer for an undisclosed sum.

In November 2014, Kagin’s Inc. announced it was offering what was possibly the largest gold nugget in private hands.

The nugget had been found by a man who was prospecting for gold on public land in California’s Butte County in July 2014.

“Large California nuggets are incredibly rare and valuable,” noted Donald Kagin, president of Kagin’s Inc., of Tiburon, Calif. He is a specialist in pioneer and early U.S. gold coins, and is author of Private Gold Coins and Patterns of the United States.

David McCarthy, senior numismatist at Kagin’s, evaluated the nugget and confirmed its provenance.

“Fortunately, the discoverer of the Butte Nugget photographed its excavation step by step. I was able to use his pictures to positively identify the location where the gold was discovered,” McCarthy said. “Nuggets like this don’t come along ever day — I really didn’t believe that I would see a California nugget of this size unearthed during my lifetime.”

The Butte Nugget was then displayed at the San Francisco Fall Antiques Show Oct. 23 to 26, in San Francisco. While the piece was on display a buyer approached Kagin’s, and the nugget was sold on Oct. 24.

Both the finder and the buyer request that neither their names nor the price paid be made public, according to Kagin.