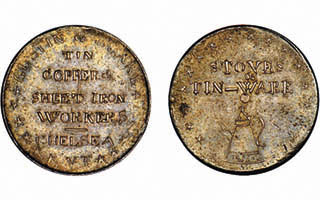 One of the finest 1835 Gustin & Blake copper tokens — the definition of rusticity in striking and engraving.

In today’s world of modern coinage, perfection is the norm. Buy a gold or silver American Eagle or a commemorative coin from the U.S. Mint, and chances are that even under strong magnification the surfaces will approach perfection.

The elements of the designs are perfection as well — with each digit or letter being carefully formed. Mint State 69, neat! MS-70, marvelous!

However, in terms of traditional numismatics, rusticity — folk art, so to speak — can be very desirable, perhaps even more so than perfection!

The series of Hard Times tokens was defined by Lyman H. Low in his 1899 book, Hard Times Tokens, as extending from 1832 to 1844. Coins were scarce in some of these years, and private minters filled the gap by making copper tokens about the size of a cent. These passed readily in commerce.

Among the most rustic of such pieces are those made in Chelsea, Vt., by the partnership of Gustin & Blake, metal workers and tinware manufacturers. Perhaps by using the end of a screwdriver to punch into dies to create letters and by other makeshift implements — not a set of engraving punches — they created tokens to advertise their business. On one side was lettering. On the other side, lettering plus a tin teapot in outline appeared, with the faint date 1835 below.

Lyman H. Low called their tokens as having “probably the crudest workmanship of any contained in the series” — a numismatic compliment, sort of, as rusticity among Hard Times tokens trumps precision and uniformity, at least in the eyes of most enthusiasts. Low was so fascinated that he traveled to Chelsea to see what he could learn of their history.

Today, Gustin & Blake tokens are usually found in grades from Very Good to Very Fine or so, always weakly struck in areas and on rough planchets. Several hundred exist, so they are not rarities. These are in great demand, and a nice example such as the one I illustrate is apt to sell in the high hundreds of dollars.

In the same theme, among Colonial coins, crude and rustic 1652 Willow Tree silver coins are among the most expensive and desirable as are the hand-struck 1737 Higley coppers from amateurishly prepared dies.