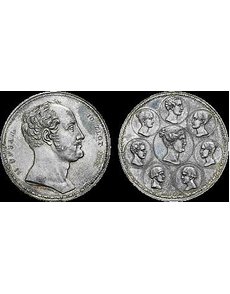 An 1835 silver Family ruble of Russia set a record for highest price achieved by any single coin sold at auction in Germany.

German auction firm Fritz Rudolf Künker, based in Osnabrück, sold the Family ruble struck honoring Czar Nicholas I and his family for a record €747,500 (about $980,460 U.S.) including the 15 percent buyer’s fee.

The coin (which is denominated 1.5 rubles or 10 zlotych) is one of five variants of the famed rarity, each represented by an example offered in the auction of “High quality Russian coins.” The Type I example in the auction is one of 36 coins of the type, struck in the effort to honor the czar and his family upon the 10th anniversary of his reign.

All five of the Family Ruble coins in the auction were accompanied by an expert report of the State Historical Museum Moscow, and the director of the Moscow Coin Cabinet, Igor Shiryakov, stressed the importance of the items at the beginning of the auction.

The five Family rubles together realized €1,627,250 (about $2,134,270 U.S.) including the buyer’s fee, against a combined estimate of €644,000. All of the Family ruble coins were sold to anonymous winners bidding on the telephone. Those in the crowded auction room applauded after each of the five lots was hammered down.

A total of 188 lots from 192 lots offered, or 97.9 percent, were sold from the Russian portion of Künker’s auction series. That portion realized an estimated €3.35 million (about $4.4 million U.S.) with the buyer’s fee included.

Sale No. 201, offering “Numismatic Rarities,” a wide range of ancient and historic world coins, led the auction day at the Estrel Convention Center. A total of 798 lots from the 806 offered (or 99 percent) were sold as this auction realized an estimated €7.5 million (about $9.8 million U.S.) including the buyer’s fee.

The Friedrich Popken collection of coins and medals from Salzburg composed the 196 lots in sale No. 202. The catalog listed the history of the region, providing a list and biography of all the archbishops ranging from Pilgrim II von Puchheim from the mid-14th century through Ferdinand in the early 19th century.

All lots may be viewed online and the catalogs may be downloaded at the auction house website, www.kuenker.de. Bidding may also be accomplished through www.sixbid.com.