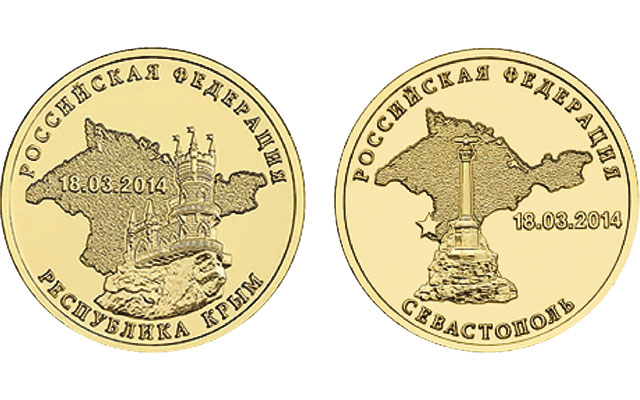 The Central Bank of Russia released two new circulating commemorative 10-rubles coin Oct. 9 to celebrate the annexation of Crimea on March 16, 2014. One coin specifically marks Crimea, left, and the other coin, right, commemorates the city of Sevastopol, in Crimea. 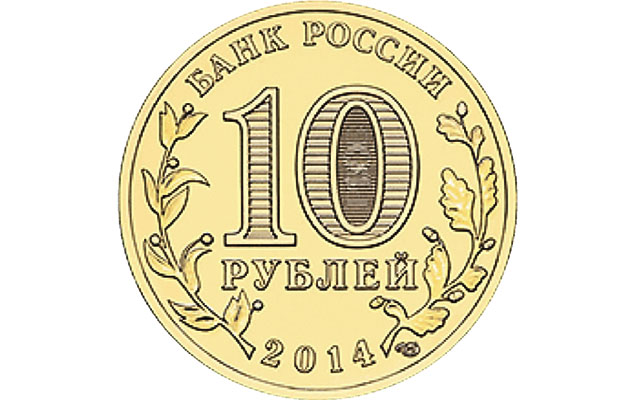 Both coins share a common obverse design, the Russian bank’s name and the denomination in Russian, with oak and laurel branches and the year date 2014.

On Oct. 9, the Central Bank of Russia issued the coins, the plans of which were first reported back in early May.

Both coins in the "Entry of the Republic of Crimea and the City of Federal Importance Sevastopol into the Russian Federation” program are denominated 10 rubles.

The federal city of Sevastopol is located on the Crimean Peninsula, which was annexed by Russia following a March 16 referendum. The vote was held under the specter of the intervention of Russian military forces and has been declared invalid by the United Nations General Assembly.

A total of 10 million of each of the 10-ruble coins are to be issued.

The reverse side of the Republic of Crimea coin shows the “Swallow’s Nest,” a castle built in 1912 on the Crimean peninsula, set against a map of the Crimean Peninsula.

The reverse of the Sevastopol coin shows a monument to ships that were intentionally sunk during the Crimean War, against a map of the Crimean Peninsula that is shown in a slightly different treatment than on the other coin. A star indicates the city’s location on the peninsula.

Both reverses include the issuing country’s name, the theme in Russian language, and the March 18, 2014, date of the Russian annexation of Crimea.

On these coins, the obverse shows the Bank of Russia name in Russian, stylized laurel and oak branches, the Mint mark, year date and denomination.

Russia's brass-plated steel 10-ruble coin weighs 5.63 grams and measures 22 millimeters in diameter, or about the size of the United States’ Jefferson 5-cent coin (but slightly heavier).