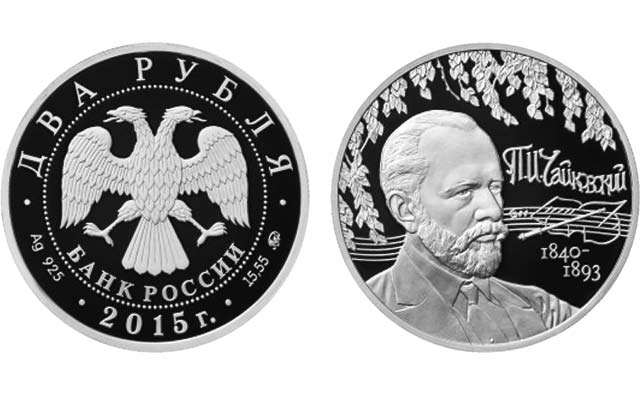 Images courtes of the Central Bank of Russia.

The Central Bank of Russia on April 1 is issuing a new coin in its “Outstanding Personalities of Russia” series, honoring composer Pyotr Ilyich Tchaikovsky.

The Proof .925 fine silver 2-ruble coin marks the 175th birth annivesary of the composer known for the three ballets, The Nutcracker, Swan Lake and The Sleeping Beauty. The new coin was announced March 31 by the Central Bank's press center.

The coin’s reverse depicts the composer, against the background of birch branches, a stave, a musical score, and a violin.

A stylized inscription of his name and the years of his birth and death also appear.

The obverse carries the emblem of the Bank of Russia, the two-headed eagle. Inscriptions on the coin translate to BANK OF RUSSIA, the denomination, year date and the metal fineness and periodical symbol. The Mint mark from the Moscow Mint also appears.

The coin weighs 15.55 grams, measures 33 millimeters in diameter and has a mintage limit of 3,000 pieces.

Collectors will have to search the secondary market to obtain this coin.