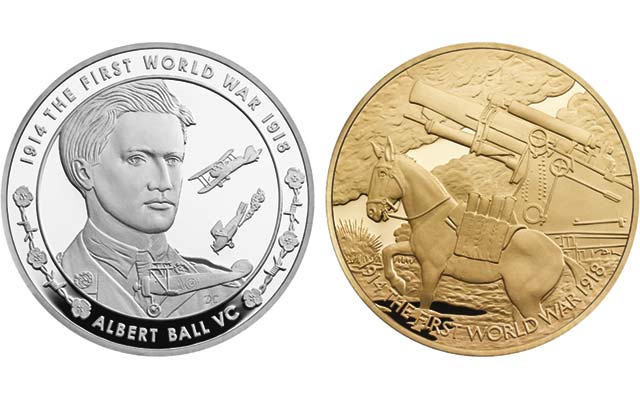 The Royal Mint on May 27 launched the 2015 six-coin sets in its annual series of £5 coin sets honoring the centennial of World War I. Two of coins honor heroic pilot Albert Ball, left, and the service of animals in war, right.

The Royal Mint continues to commemorate World War I and the journey from outbreak to armistice.

A new series of £5 coins, announced May 27, kicks off with 2015 silver and gold coins honoring the people, machinery, and even animals that were critical to winning the war effort.

Each year until 2018, a set of six designs is being released to cover a range of themes: key battles, the armed forces and support services, technological developments of the period, the cultural impact of war, and stories of some of the heroes of the time. The final set will reflect on the armistice and the ongoing legacy of the war.

In addition to the 2015 coins honoring Cavell and Ball (a Victoria Cross winner), the four other 2015 coin designs celebrate animals at war (showing a mule at the center of battle), submarines, the Merchant Navy, and the Battle of Gallipoli.

Edge lettering on each coin is borrowed from appropriate statues, monuments or literature.