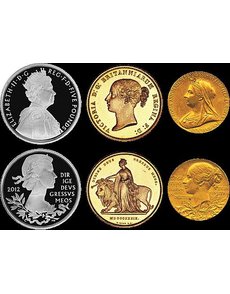 Designs for the 2012 Diamond Jubilee £5 coin from the Royal Mint, unveiled Oct. 11, borrow in concept and design from traditional coins and medals of Queen Victoria. A modern portrait of Queen Elizabeth II appears on the obverse, top left, with a reverse, bottom left, taking inspiration from Mary Gillick’s effigy of the queen from the beginning of her reign. The reverse design bears a legend taken from the 1839 Una and the Lion £5 pattern, the first coin to show Queen Victoria, center images, and also borrows from the 1897 medal honoring Queen Victoria’s Diamond Jubilee, shown at right.

Images courtesy of the Royal Mint and www.HeritageAuctions.com.

To look forward, Britain’s Royal Mint decided to look back.

In commemorating the Diamond Jubilee of Queen Elizabeth II’s accession to the throne, the Royal Mint is issuing £5 coins with a design paying homage to another historic monarch, Queen Victoria, the only British monarch to have enjoyed a diamond jubilee, or 60th anniversary, on the throne.

The designs were unveiled Oct. 11.

Queen Elizabeth II will reach that milestone in June 2012.

Ian Rank-Broadley designed the new £5 coin, basing the obverse on a sculpture he prepared for the new Supreme Court Building in London (www.coinworld.com/articles/royal-mint-to-release-new-elizabeth-ii-effigy/). The reverse honors Mary Gillick’s effigy of Queen Elizabeth II that was used for circulation coins from 1953 through 1967.

The obverse image of Queen Elizabeth II on the Diamond Jubilee coins shows her wearing the garter robes,which the queen wears when she attends the “Order of the Garter,” the most senior and the oldest British order of chivalry, which honors those who have held public office, contributed to national life or have served the sovereign personally.

Kevin Clancy, director of the Royal Mint Museum, said: “Ian’s new portraits tell the story of the Queen’s long reign with beauty and elegance, dignity and character, evoking the spirit of the Queen as only a truly gifted artist can”.

For the reverse, Rank-Broadley added other elements to a design inspired by Gillick’s portrait of the young queen wearing a laurel crown. An olive branch, inspired by an element from the reverse of the commemorative medal struck for Queen Victoria’s 1897 Diamond Jubilee, which provided Rank-Broadley inspiration, is incorporated into the 2012 coin’s reverse design.

The 1897 medal “married the Old Head coinage portrait with the Young Head, used at the start of Victoria’s reign. In the words of one contemporary journalist, they were ‘flawless’ and ‘beautiful works of art,’ ” according to the Royal Mint.

A ribbon also is added to the Gillick design. The ribbon appears below the portrait and gives the date 2012 and reads DIRIGE DEVS GRESSVS MEOS, which translates to “May God Guide my steps,” which famously appears on the Proof 1839 Una and the Lion gold £5 pattern coin (which was the first coin to carry Queen Victoria’s portrait).

Rank-Broadley is perhaps best known as the designer of the current effigy of Elizabeth II on British coinage (which was introduced for coinage of the United Kingdom in 1998). The Diamond Jubilee design is exclusive to the 2012 £5 coin and will not be used for circulating denominations.

The unveiling kicked off sales of the coin, with a Brilliant Uncirculated copper-nickel version now available for £12.99 (shipping and handling are additional).

It is presented in an informative presentation folder recounting the life and achievements of the queen.

Precious metal versions will become available in January 2012, according to the Royal Mint’s announcement.

The BU £5 coin is one of six versions to be issued for the Diamond Jubilee.

According to government documents granting approval for the coins, the Royal Mint will strike copper-nickel, silver, gold-plated silver, piedfort (double thickness) silver, gold and platinum versions of the £5 coin.

The finenesses of the gold and platinum coins and the weight of the gold coin were not identified in the document or in a later statement from the Royal Mint.

An edge inscription, A VOW MADE GOOD, will appear on the silver, gold and platinum coins, while the copper-nickel and gold-plated silver coins will have reeding on the edge.