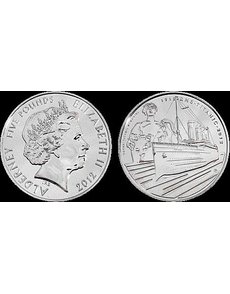 New £5 coins from Alderney mark the centennial of the RMS Titanic’s maiden, ill-fated voyage a century ago. A Brilliant Uncirculated copper-nickel example, shown here, and a Proof .925 fine silver version are available from the Royal Mint.

The Royal Mint is commemorating the 100th anniversary of RMS Titanic’s maiden voyage with the release of a £5 coin issued for the Channel Island of Alderney.

The coin is available in both Brilliant Uncirculated copper-nickel and Proof .925 fine silver versions.

The voyage began on April 10, 1912, when RMS Titanic, the largest passenger steamship in the world at the time, set sail from Southampton to New York with 2,223 people on board. Owned by the White Star Line and constructed at the Harland and Wolff shipyard in Belfast, the luxurious passenger liner was built to be a showstopper — both visually and technically — but it met a tragic fate.

Late on April 14, Titanic struck an iceberg, buckling plates and creating holes in its hull that led to the ship’s sinking less than three hours later — a catastrophic disaster that resulted in the loss of more than 1,500 lives.

Both coins share a design by Lee Robert Jones from the Royal Mint engraving team.

The reverse depicts a sleek profile of Titanic with Jones’ rendition of the Thane memorial in Belfast, Northern Ireland, looking down on the ship as it sails through the sea. Jones said: “It is my intention with design to supply a visual narrative; to tell a story. My design is concerned with the spectacle of the ship and the tragedy that awaits. I have used an ‘apparition’ of Sir Thomas Brock’s Thane memorial, reaching in readiness before the ship with a laurel wreath, its stark silhouette contrasting with the detailed striking model of Titanic cutting through the waves with purpose and pride.”

Erected on June 26, 1920, as a memorial to all those who died in the Titanic disaster, the marble figure of the goddess Thane stands in Belfast, home of the Harland and Wolff shipyard where Titanic was constructed. The statue was designed by Sir Thomas Brock, who also designed the Queen Victoria statue that stands outside Buckingham Palace.

The Ian Rank-Broadley effigy of Queen Elizabeth II appears on the obverse of the new coins.

The coins each weigh 28.28 grams and measure 38.61 millimeters in diameter.

The BU version has an unlimited mintage and is available in an informative presentation folder detailing the story of Titanic and its tragic voyage for £12.99.

The Proof silver version is limited to a 7,500-coin mintage and is packaged in a black gift box including a certificate of authenticity for £82.50.