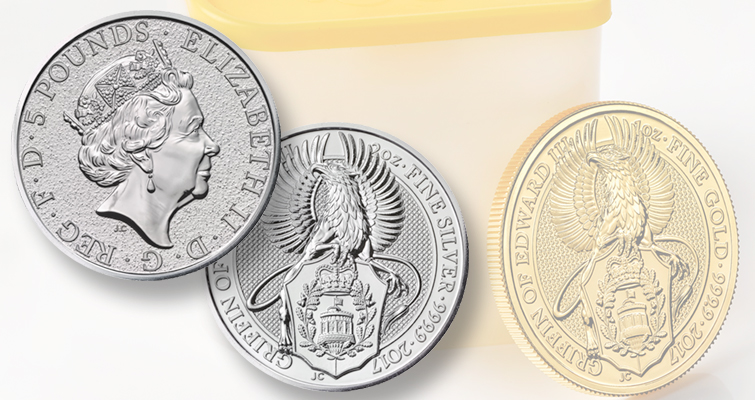 The Royal Mint continues its Queen’s Beasts bullion series with the second issue, featuring the griffin of Edward III. The 1-ounce £100 gold coin is the largest gold coin in the series. The other coin is a two-ounce silver £5 coin. 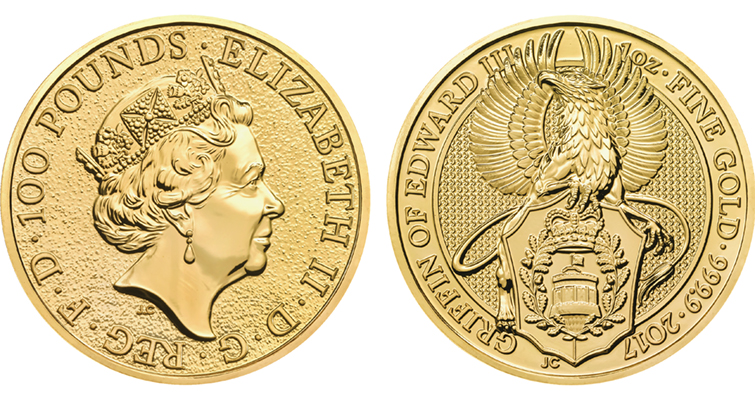 The Royal Mint continues its Queen’s Beasts bullion series with the second issue, featuring the griffin of Edward III. The 1-ounce £100 gold coin is the largest gold coin in the series. 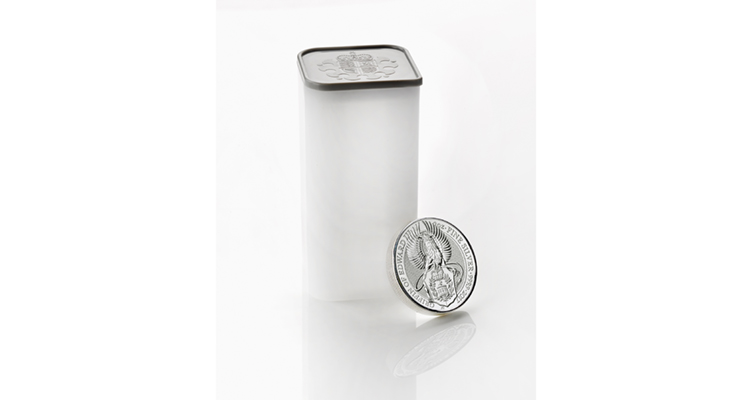 The silver £5 coin weighs 62.42 grams, measures 38.61 millimeters in diameter and is available singly or in tubes of 10 coins.

The Royal Mint continues its Queen’s Beasts bullion series with a second release,  this one honoring the griffin of Edward III.

This is the second issue in the gold and silver bullion coin series that was first launched in March 2016 with the gallant lion of England.

In celebration of the Queen’s Beasts — 10 creatures that have been used throughout hundreds of years in British royal heraldry — Royal Mint designer Jody Clark has reimagined their designs and the Royal Mint is introducing them one beast at a time.

The griffin is depicted on the reverse of the 2017 coins, standing on its hind legs with wings raised, its talons gripping a shield that features the badge of the House of Windsor. A textured background symbolizes chain mail.

The Griffin design is featured on tenth-, quarter- and 1-ounce .9999 fine gold coins, as well as on the Royal Mint’s second ever official United Kingdom 2-ounce .9999 fine?silver coin.

Bearing the fifth official portrait of Queen Elizabeth II, also by Clark, the Queen’s Beasts series takes its place in the Royal Mint’s core bullion range alongside the organization’s flagship gold sovereign and Britannia gold and silver bullion coins, as well as the Royal Mint Refinery range of gold and silver bars.

The mythical griffin was thought to be strong and courageous, a watchful guardian with keen sight and swift action. It was closely associated with Edward III, who ruled for more than 50 years, and appeared on his private seal.

Clark said, in a press release: “I depicted the Griffin standing on its hind legs to show its unusual form. It has the body and hind legs of a lion, with the head and wings of an eagle. Elements like the oversized talons and the long sweeping lion’s tail emphasise the creature’s unique appearance. It was thought that this combination made the creature one of the most fierce of the Queen’s Beasts, as the eagle was said to be king of the birds and the lion was king of the beasts. I researched imagery of both lions and eagles in the wild to make sure that my design was realistic, but I was careful to keep a fantastical feel so there is still a sense of the original dramatic sculptures.”

The Royal Mint reflects the convention of portraits alternating left and right on the United Kingdom coinage by showing the griffin facing left (the lion faces right). All subsequent issues will also alternate direction.

The series was inspired by the Queen’s Beasts sculptures, each standing at around 2 meters tall, originally created in plaster by James Woodford for the coronation ceremony of Queen Elizabeth II held in Westminster Abbey in 1953.

The heraldic creatures symbolized the various strands of royal ancestry brought together in the young woman about to be crowned queen. Each beast, posed holding a colorful heraldic badge or the arms of a family associated with her forebearers, was inspired by the King’s Beasts of Henry VIII that still line the bridge over the moat at his Hampton Court Palace.

Today, those plaster Queen’s Beasts, now entirely painted, are at the Canadian Museum of History in Quebec, while Portland stone replicas, also carved by Woodford, watch over Kew Gardens in the United Kingdom.

The series’ silver £5 coin weighs 62.42 grams, measures 38.61 millimeters in diameter and is available singly or in tubes of 10 coins.

The tenth-ounce gold £10 coin measures 16.5 millimeters in diameter and is available singly or in tubes of 10 coins.

The quarter-ounce gold £25 coin measures 22 millimeters in diameter and is available singly or in tubes of 25 coins.

The 1-ounce gold £100 coin measures 32.69 millimeters in diameter and is available singly or in tubes of 10 coins.

The Queen’s Beast coins have an unlimited mintage limit. 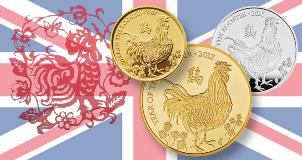 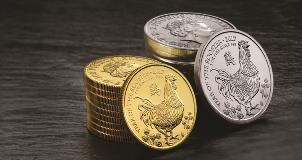