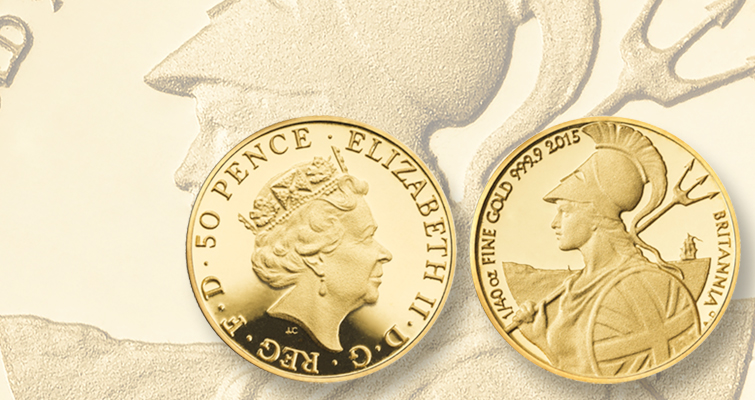 The Royal Mint’s smallest Proof Britannia coin weighs a 40th of an ounce, and is available in either silver (denominated 5 pence) or gold, as seen on this 50-penny piece.

Britain’s Royal Mint on July 15 launched its new Britannia 2015 Proof coin collection in .9999 fine gold and .999 fine silver, including individual coins such as the United Kingdom’s smallest coin, weighing just one 40th of an ounce.

Britannia is the female personification of Britain, featured prominently on coinage for centuries, including on the Britannia coin series first introduced in 1987 as a gold coin and in 1997 as a silver coin. It’s become tradition for a new design to appear on the Britannia each year, with every artist bringing a unique flair to the icon’s image, the changing face of Britain.

The 2015 Britannia has a nautical theme and was designed by Antony Dufort. The icon wears her familiar Corinthian helmet and holds the trident, a nod to Britain’s maritime might. A masted ship with billowing sails reinforces the traditional seafaring nature of the island nation.

Each set or coin is housed in a Royal Mint case, tailored accordingly to the contents, and is complemented by a booklet revealing Britannia’s story and the inspiration behind the design.

Want to read more about Britannia coins? Check out these Coin World stories!