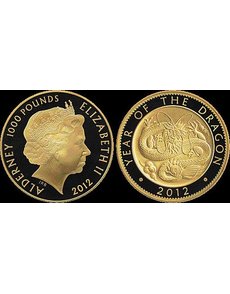 The Royal Mint is celebrating the Year of the Dragon with a special order of 10 Proof kilogram .999 fine gold £1,000 coins, which were struck under private contract. Serial No. 8 is being auctioned April 5 in Baldwin’s Hong Kong auction.

An auction firm with a long history of selling items of numismatic history is now issuing them.

A.H. Baldwin & Sons has contracted with Britain’s Royal Mint to celebrate the Year of the Dragon in the Chinese zodiac calendar with kilogram-sized Proof gold coins.

The Royal Mint struck 10 Proof .999 fine gold £1,000 coins that are legal tender in Alderney, the third largest of the British Channel Islands.

This is the first time Baldwin’s has commissioned the Royal Mint to strike a coin, according to Caroline Newton of Baldwin’s.

The North American numismatic community learned of the coins when Baldwin’s announced the sale of one example of the coin in the firm’s April 5 auction in Hong Kong.

The coin “is the very first to be offered for sale by auction, anywhere in the world and offers a unique opportunity to own a piece of future numismatic history,” according to the Baldwin’s announcement.

That example is serial number 8; eight is believed an auspicious number in many Asian cultures.

The obverse bears the Ian Rank-Broadley effigy of Queen Elizabeth II and the reverse features a Dragon design created by the most senior engraver in the Royal Mint, Gordon Summers.

The Royal Mint has issued coins in the name of Alderney for more than 20 years and, like many world mints, takes on contract work for distributors to sell, choosing when to attach its name to the product release on a case-by-case basis.

In recent years the Royal Mint has struck a number of commemorative coins for Alderney that it sold directly to Royal Mint customers, including coins for the 50th anniversary of the Mini, John Lennon, the 2011 wedding of Prince William and Catherine Middleton, and the 2012 centennial of the Titanic.

Each 2012 Year of the Dragon kilogram coin weighs 1,005 grams and measures 100 millimeters in diameter. According to Newton, the coin is the largest denomination coin that the mint is allowed to produce and, “we believe it is the lowest mintage they have ever produced.”

The auction, to be held at the Holiday Inn, Kowloon, Hong Kong, comprises 1,094 lots including a large selection of Chinese and Hong Kong bank notes, sycee and world coins.

Sales of the remaining nine coins will be determined after the auction, Newton said.

The government of the Channel Island of Alderney provides an online catalog of its commemorative coins, but the listing, found at www.alderney.gov.gg/coins/, is only complete through early 2010. ¦