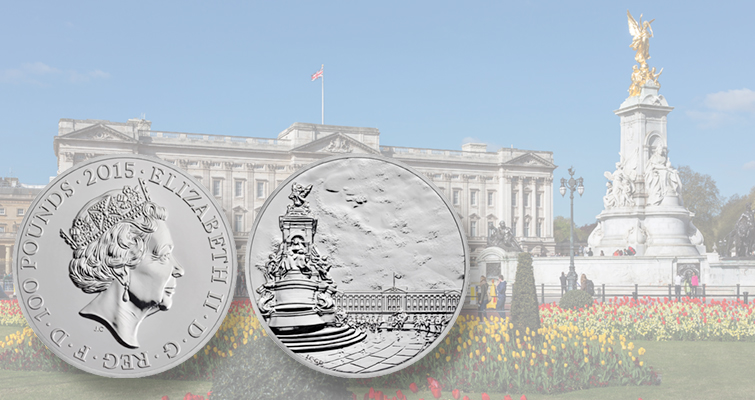 Images courtesy of the Royal Mint and David Iliff, Wikipedia. 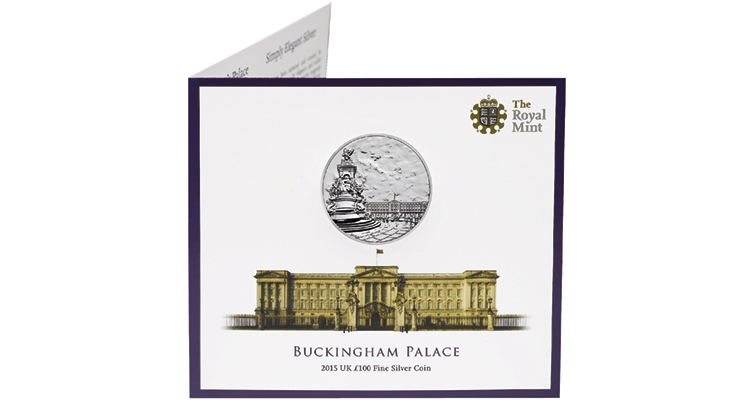 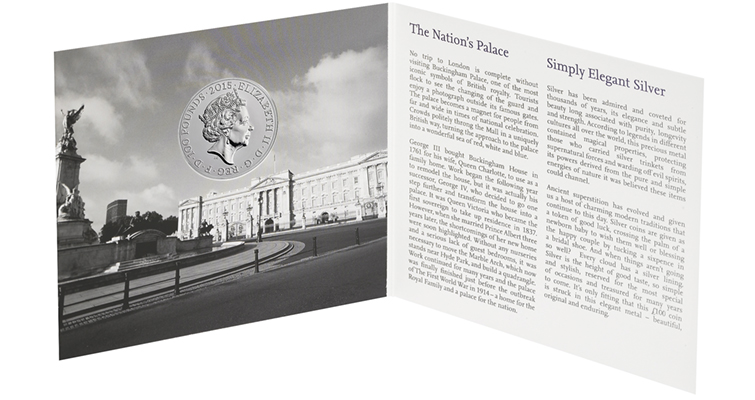 The 2015 coin is the second .999 fine silver £100 coin sold by the Royal Mint at its face value, following the rapid sellout in late December and early January of a silver £100 coin honoring another London landmark, Big Ben.

The 2-ounce £100 coin captures the timeless elegance of the building that is both a home to Britain’s royal family, and a working building housing the offices of the staff who support the day-to-day activities of the royal family.

The palace is undergoing renovations, but remains an instantly recognizable architectural icon for the millions of British citizens and tourists who have seen it in person or in pictures and on film, according to Shane Bissett, the Royal Mint’s director of commemorative coin and medals, in a press release.

“The building is an instinctive rallying point in the capital city during times of national celebration and mourning, and was a natural choice for the next design in The Royal Mint’s popular £100 for £100 coin series,” he said.

George III bought Buckingham House in 1761 for his wife, Queen Charlotte, and work began the following year to remodel it. Later, George IV would transform the house into a palace. Architect John Nash set about realizing the king’s ambitious plans, but spiraling costs eventually cost him his job and George IV never moved in.

Queen Victoria became the first sovereign to take up residence in 1837. However, when she married Prince Albert three years later, shortcomings of her new home were highlighted. The Marble Arch, previously located near where the palace's  balcony is now, was moved, and nurseries and guest bedrooms were added. Work continued and the palace was finally finished just before the outbreak of World War I in 1914.

Buckingham Palace was one of the sights that inspired Royal Mint’s engravers Glyn Davies and Laura Clancy when they took on the challenge of creating portraits of iconic landmarks.

They were motivated to picture the wonders of Britain from the point of view of the thousands of tourists who visit, cameras in hand, to collect their own memories of Britain’s famous structures and sights. Their portrait of Buckingham Palace shows the building as seen from a tourist’s view, from across the Mall past the Victoria Memorial.

RELATED: See the new effigy now appearing on coins of the United Kingdom

The BU coin weighs 62.86 grams, measures 40 millimeters in diameter and has a mintage limit of 50,000 pieces, the same mintage as the first coin, which quickly sold out.

Want to know about world coins sold at their face value? Check out these Coin World stories!