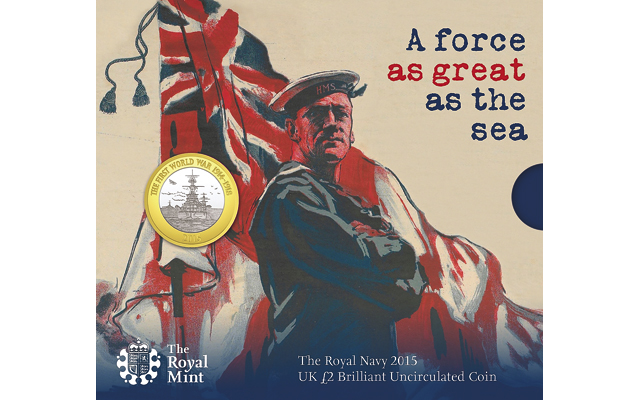 The circulating commemorative 2015 £2 coin from Great Britain is packaged in a colorful,patriotic blister pack with an unlimited mintage. 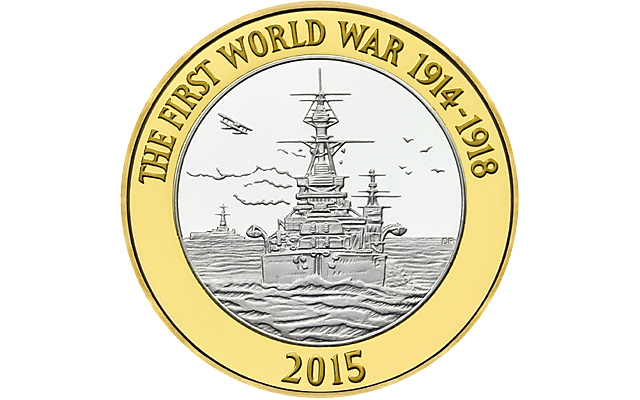 A new circulating commemorative 2015 £2 coin honors the ongoing centennial of World War I and the role played by the Royal Navy.

A century ago, the Royal Navy’s service to Great Britain extended to World War I.

From the outset, the Navy ferried troops to France, where they would offload and begin a land campaign. Sailors would go on to do battle at sea, overcoming the threat of the German fleet and their feared U-boats, and maintaining a blockade that would cripple the German war effort. Naval troops would fight on land, in the trenches and in the air.

The reverse design by military artist David Rowlands reflects the power of this force, featuring a mighty Royal Navy battleship.

The edge lettering reads THE SURE SHIELD OF BRITAIN, a reference to one of the Navy’s nickname.

The ringed-bimetallic £2 coin has a copper-nickel center and a nickel-brass outer ring.

The coin weighs 12 grams, measures 28.4 millimeters in diameter and has an unlimited mintage in BU finish. Precious metal and other versions of the coin are available in some annual sets, or will be issued at a later time, including in circulation.

The BU coin retails for £10 and is presented in a display folder that tells the story of the Royal Navy in the “Great War.”