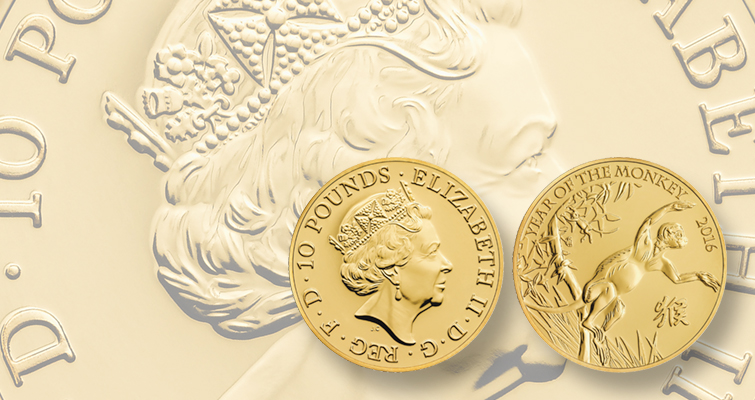 The Royal Mint’s Lunar coin series continues in 2016 with the Year of the Monkey. The series’ Brilliant Uncirculated tenth-ounce gold £10 coin is seen here. 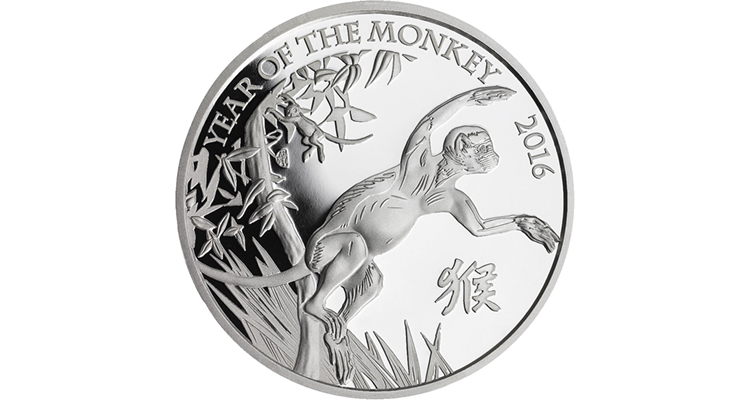 The Shengxiào Collection from the Royal Mint, of coins celebrating the Lunar Year of the Monkey, includes this Proof .999 fine silver €10 coin.

The Royal Mint continues its Shengxiào Collection with coins celebrating the Lunar Year of the Monkey, which starts Feb. 8, 2016.

The coins are made of either .999 fine silver or .9999 fine gold. Brilliant Uncirculated and Proof examples are offered now at a premium, with bullion versions to become available later.

Each lunar year is symbolized by one of 12 animals, whose traits are attributed to those born during that year.

British-Chinese artist and printmaker Wuon-Gean Ho, designer of the Royal Mint’s lunar Horse and Sheep coins, continues the series with the Monkey, a prominent and popular figure in Chinese culture believed to symbolize luck, honor and wealth.

Those born in a Year of the Monkey are thought to be energetic, quick-witted and sociable, and to enjoy applying their appetite for knowledge to creativity and problem solving.

Wuon-Gean has depicted two rhesus monkeys in her composition. Wuon-Gean explains: “Rhesus monkeys and humans shared a common ancestor about 25 million years ago. They are extremely intelligent, sociable and family oriented, and are equally good at climbing and swimming.”

The obverse of each coin features the Jody Clark effigy of Queen Elizabeth II.

The coins are supplied in bold red packaging, together with a booklet that reveals the customs that inspired the artist. Mintage figures feature the number “8,” thought to be lucky in Chinese culture.

The Brilliant Uncirculated tenth-ounce gold £10 coin has a mintage limit of 1,888 pieces and retails for £175.

This year kilogram coins are introduced to the collection.

Pricing in U.S. dollars will be determined at the time of order from the Royal Mint's website.

Like the Royal Mint's Lunar coins? Check out these Coin World stories about other issues in the series!