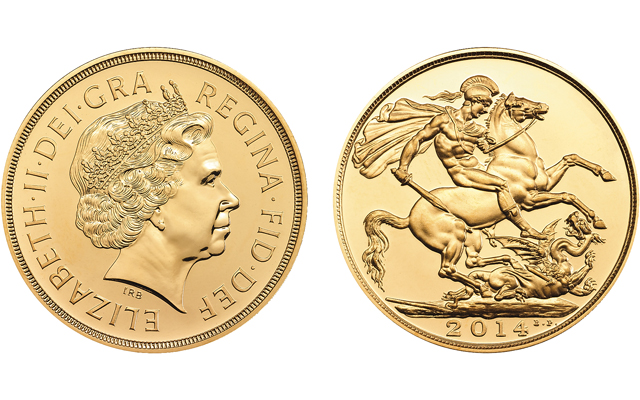 A new Brilliant Uncirculated gold £2 double-sovereign with a mintage limit of 1,300 pieces marks the first birthday of Prince George of Cambridge.

The Royal Mint on July 29 announced that it was striking special gold £2 double-sovereign coins for the first birthday of Prince George of Cambridge, which was July 22.

As with all sovereign coins, the reverse shows the famed Benedetto Pistrucci design of St. George slaying a dragon while riding a horse.

Other than the coin’s Brilliant Uncirculated finish, the coin is indistinguishable from the Proof example offered in two annual special sets.

One annual set containing a Proof example is the special three-coin premium set, which also includes a sovereign and half-sovereign, has a sales limit of 500 sets; the other is a five-coin set (the three-coin set plus a quarter-sovereign and 5-sovereign coin), limited to sales of 750 sets.

No design element on the Prince George BU gold double sovereign coin identifies it as the special first birthday commemorative.

The .986 fine gold £1 sovereign has been the flagship coin of the Royal Mint for centuries and is recognized and admired all over the world, according to Royal Mint officials.

Earlier this year, the Royal Mint reported the sellout of 7,500 Proof .925 fine silver £5 coins bearing a seldom-seen heraldic Royal Arms design in honor of the first birthday of Prince George.

Shane Bissett, director of commemorative coin and bullion at the Royal Mint, said this is the first time that a double sovereign struck to Brilliant Uncirculated standard has been made available as a single coin, rather than as part of a set.

“It is a very regal coin, which was even named after the sovereign himself, and intended to be a fitting tribute to a Royal baby who is destined to be king,” Bissett said, in a press release.

The double sovereign features the Ian Rank-Broadley effigy of Queen Elizabeth II on the obverse.

To order or to learn more about the coin, visit a special page on the Royal Mint’s website.