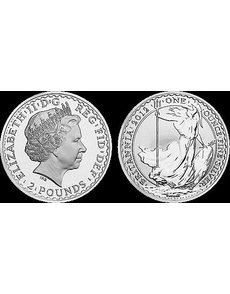 Britannia 1-ounce silver bullion coins, now struck from .958 fine or “Britannia” silver, will be replaced with .999 fine silver versions beginning with the 2013 coins. The gold coins will be made of .9999 fine gold.

Silver and gold Britannia coins are no longer “fine” they way they are, the Royal Mint has decided.

This signals a departure from the historic “Britannia” silver standard of .958 fine, as well as the standard .9167 fine gold in use for British coins for centuries.

The Britannia standard of silver was introduced as part of the recoinage of William III in 1696, in an attempt to limit the clipping and melting of sterling silver coins (sterling is .925 fine).

Beginning in November, collectors and investors will be able to buy 2013 Britannia 1-ounce .999 fine silver bullion coins (which are denominated £2) and Britannia 1-ounce .9999 fine gold bullion coins (which are denominated £100). The reverses of the coins will bear the traditional Philip Nathan design of a standing figure of a graceful Britannia, wind blowing her robes left while she holds a trident. Britannia wears a Corinthian helmet and bears also a shield.

Nathan’s reverse design appeared in 1987 with the debut of the Britannia gold bullion program, and was first featured on a silver Britannia in 1998, a year after the silver program began to coincide with the gold program’s 10th anniversary. Since 1998, eight other different designs have appeared on Britannia coins, with Nathan’s design returning to the coin five times, including on the 2012 coins marking the 25th anniversary of the program.

A different reverse design than Nathan’s standard will be used for Brilliant Uncirculated and Proof versions of the Britannia coins, which are to be launched in April 2013.

The obverses of the various Britannia bullion and collector coins have carried two different portraits of Queen Elizabeth II, now showing one by Ian Rank-Broadley.

The Royal Mint has not decided whether the new bullion coins will bear an indication of the new higher fineness.

Coins of the new fineness will weigh less than the coins of the current standards because the gold and silver will not be alloyed with additional metal. Copper is part of the alloy of the current silver coin, and silver is part of the alloy used for the current gold coins. Current Britannia coins weigh more than one ounce but contain only one ounce of pure precious metal, the additional alloying metal factoring in to make the historical fineness.

Because the new coins will be made of pure gold and silver rather than be composed of alloys, they will likely have a different hue than current Britannia coins; the color change will likely be most evident in the gold versions.

Die trials have not yet been completed, according to Charlotte Shaw, the Royal Mint’s public relations and communications manager, so no images of the new coins are available.

The bullion coins will be minted to order, a contrast to the program previously, when the silver Britannia has had a mintage limit (100,000 in recent years).

While Shaw described the decision to adopt pure gold and silver compositions as an extension of the Royal Mint brand — “We already have clients who purchase bullion product from us and we are looking to grow our presence in that market” — another Royal Mint official characterized it is a stark departure from how the program has been handled for the first 25 years, an apparent admission that the .958 fineness for the silver coins did not resonate with collectors who could choose from .999 fine silver 1-ounce coins from the United States, Austria, Australia, China and Mexico, among other issuers.

The move to a higher fineness is being driven by increased demand, according to Nick Bowkett, bullion sales manager at the Royal Mint.

“For centuries, particularly during times of economic uncertainty or financial insecurity, people have turned to gold — and gold coins in particular — as a safe haven in terms of investment. The fact that we are seeing an increasing demand for our bullion Sovereign — and Britannia coins — suggests that gold’s stability remains as compelling as ever for today’s investors,” Bowkett said.

When the Royal Mint published noticed of the new Britannia coins on its blog on April 26, Bowkett categorized the move as “expanding into the bullion market with our product offering — a hugely significant move forward for The Royal Mint as it’s a new strategic direction for us.”

Bowkett was selected to lead the bullion team to “pursue a growth plan which aims to position The Royal Mint as a world leader in investment bullion,” according to Shaw.

As part of the bullion program overhaul, the Royal Mint is expanding its network of distributors and changing its packaging, moving from blisters to more durable tubes for easy storage and convenience.

Longer term developments include a precious metal vaulting facility for bullion investment customers to store coins purchased from the Royal Mint. The vault will be a secure facility guarded by the Ministry of Defence police and not open to the public, according to the Royal Mint. ¦