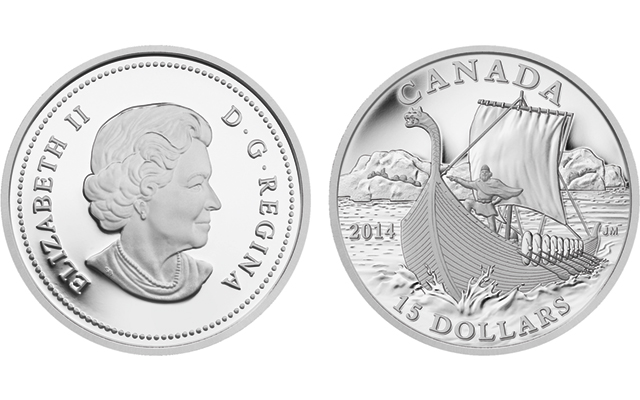 Canada’s Viking heritage is honored on a Matte Proof 2014 silver $15 coin in the Exploring Canada series from the Royal Canadian Mint.

Historians generally believe that Vikings made the earliest European contact with North America, and the earliest settlement is now being honored with a 2014 silver coin from Canada.

Though the coin program does not single out the L’Anse aux Meadows on the northern tip of the island of Newfoundland, that is where a small group of sailors landed and settled for an unknown period. The remains of the camp, which were declared a UNESCO World Heritage Site in 1978, were discovered in 1960 by Helge and Anne Stine Ingstad.

The focal points of this archaeological site are the reconstructions of three Norse buildings. According to Parks Canada, Norse sagas tell the story of a crew of 30 sailors that landed somewhere on the coast of North America as Leif Eiriksson made his historic first contact with North America.

The Matte Proof .9999 fine silver $15 Vikings coin is the fourth in the Royal Canadian Mint’s multi-month Exploring Canada series. The monthly program began in June and continues through April 2015. The Vikings coin was released Sept. 2 and, like other coins in the program, is available individually or as part of a subscription.

The reverse design by Canadian artist John Mantha shows an imposing Viking ship coming ashore on the rocky coast of Vinland (“the land of wine,” the name the Vikings gave the lush, abundant land far across the Atlantic). The captain points the way as he directs his oarsmen seated behind a row of shields.

The coin weighs 23.17 grams and measures 36.07 millimeters in diameter.

The price from the RCM will be determined based on the exchange rate at the time of purchase.