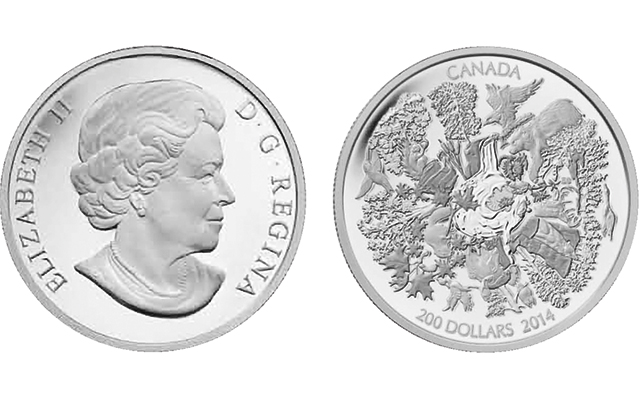 The Royal Canadian Mint will expand its offerings of silver collector coins sold at face value with a 2-ounce, $200 coin beginning Sept. 2. The coin shows the Towering Forests, the first in the Landscapes of the North design series.

The Royal Canadian Mint will issue a $200 silver coin at face value for the first time on Sept. 2, again expanding its offerings of silver coins available at face value.

The $200 denomination joins a $50 coin released earlier this year, and four $100 coins issued across the past 10 months. The practice of offering silver coins at their face value — which creates a floor in their secondary market value — began more than three years ago with a $20 coin program that is now on its 14th issue.

The first Matte Proof “$200-for-$200” coin features the Towering Forests design, which is the first in a series titled “Landscapes of the North.”

The .999 fine silver coin features shows a reverse design by Ellen Cowie of a circular collage of plants and animals common to Canada’s boreal zone.

The contiguous nature design is intended to be viewed by rotating the coin, the vignettes of Canadian plant and animal species forming a united scene.

The coin weighs 62.69 grams (2 ounces) and measures 50 millimeters in diameter.

The $200 coin is limited to sales of two per household.

Delivery of the coin is not expected for several weeks, and at press time sales have only just begun for Masters Club members, which are customers who buy $1,000 or more annually directly from the RCM.

Gatewest Coin Ltd. and Talisman Coins are official distributors for the RCM.

To order from Gatewest inside the United States, telephone the firm at 204-489-9112 or visit it online.