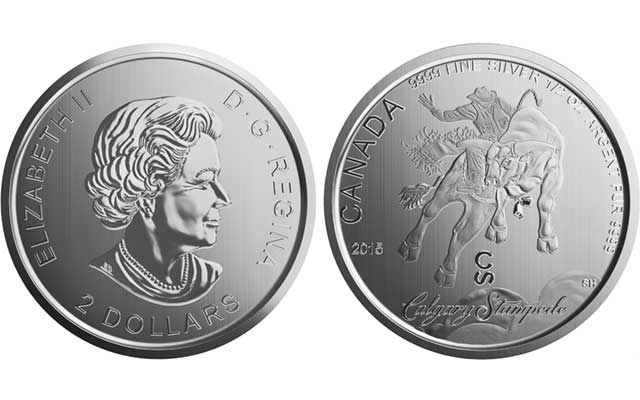 The Calgary Stampede is featured on a 2015 silver $2 bullion coin. The half-ounce coin has no mintage limit, but is limited to sales within the calendar year.

According to the Calgary Herald, the coin retails at the Stampede for “about $15,” though that price is in Canadian funds.

The reverse of the .9999 fine silver $2 coin was designed by Canadian artist Steve Hepburn, who also designed Calgary Stampede coins for the RCM a few years ago.

Hepburn’s 2015 coin design captures the tension of the longest eight seconds in sports, as a bull bucks a rider, right arm aloft and chaps bouncing in the air.

Hepburn’s bull rider appears to be leaping out of the silver background with all four of the bull’s hooves in the air above stylized clouds of dust. The Calgary Stampede logo, complete with cattle brand, appears below.

The coin weighs 15.66 grams and measures 32 millimeters in diameter.

There is no exclusivity among RCM distributors in Canada, but Silver Gold Bull has exclusive rights for U.S. and international distribution.

The 2015 Calgary Stampede silver $2 coin is available individually, in mint-sealed tubes of 20 (totaling 10 ounces), or in mint-strapped “monster boxes” of 240 coins (120 ounces). Full monster boxes also include an RCM-issued product sheet with a picture and more information about the coin.

Mintage is limited to sales in 2015, according to the Herald.

To learn more about this new offering, visit the distributor website.