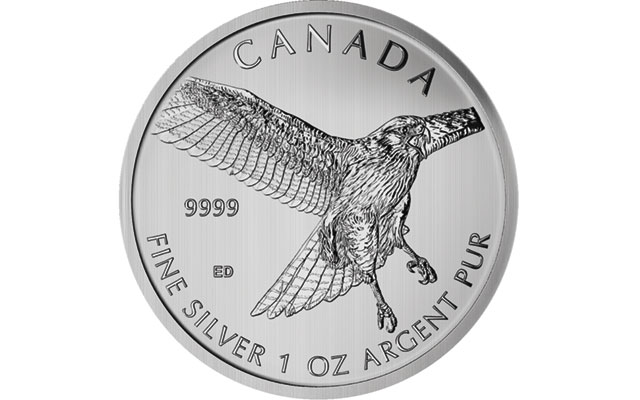 The Red-Tailed Hawk 1-ounce .9999 fine silver $5 bullion coin is the third in the Birds of Prey series from the Royal Canadian Mint. 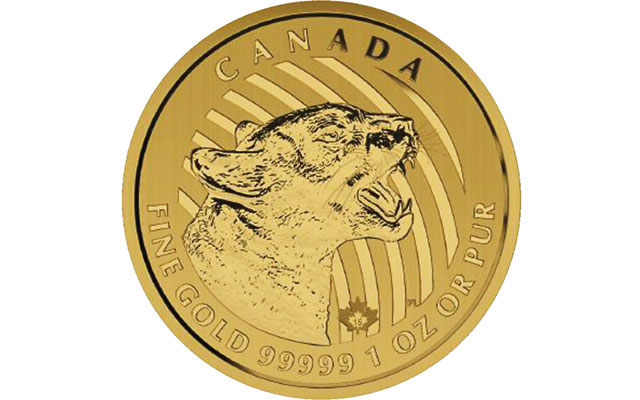 The second design in the annual Call of the Wild 1-ounce .99999 fine gold $200 bullion series from the Royal Canadian Mint depicts a growling cougar.

The Royal Canadian Mint has unleashed a Hawk and a Cougar in its annual silver and gold bullion programs.

Beginning Jan. 29, the RCM started selling the third issue from its biannual Birds of Prey series of 1-ounce silver bullion coins. The same day, the RCM began selling the second issue in its annual Call of the Wild .99999 fine gold $200 bullion coin program.

Officials of the RCM made the announcement of these coins the day before the World Money Fair in Berlin, where such news attracts major attention.

The 2015 silver $5 coin shows a red-tailed hawk descending upon its prey on the reverse designed by Emily Damstra.

The cougar is one of Canada’s most powerful, elusive and beautiful predators, and appears, growling, on the reverse of the new 1-ounce gold coin, which was designed by Pierre Leduc.

At a fineness of .99999 with a $200 denomination, the gold coin has the highest purity and face value among the world’s 1-ounce gold bullion coins.

Susanna Blunt’s effigy of Queen Elizabeth II appears on the obverse of both new 2015 bullion coins.

The 1-ounce silver bullion coin measures 38 millimeters in diameter and has a mintage limit of 1 million pieces.

The gold coin measures 30 millimeters in diameter and has no stated mintage limit.

The four-coin Birds of Prey 1-ounce silver bullion series and the Call of the Wild gold bullion series both debuted during the 2014 World Money Fair in Berlin.

The final Call of the Wild gold coin will be announced during the 2016 World Money Fair in Berlin.

The RCM does not sell bullion coins directly to the public, but uses a set of distributors that both buy and sell the coins to create a two-way market. Unlike the U.S. Mint, the RCM does not publish a complete list of its preferred or authorized distributors.