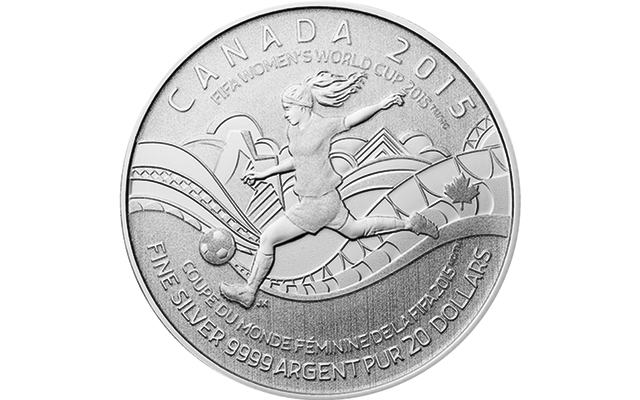 Canada's latest silver $20 in a series of coins sold at their face value marks the 2015 FIFA Women's World Cup tournament scheduled in the country from June 6 to July 5.

To mark the occasion, the Royal Canadian Mint on March 18 announced a suite of coins.

The most accessible, affordable coin in the launch is another coin in the $20-for-$20 silver series sold at the coin’s face value.

The 2015 FIFA Women’s World Cup coin is the 17th issue in a series that began in 2011. Though sales have begun, the coin will not be released to collectors until April 7, according to the RCM.

The Specimen .9999 fine silver coin features a dynamic reverse design created by artist Joel Kimmel, who specializes in sports graphics. A soccer player is shown against an abstract background, in mid-strike as she is about to launch the soccer ball down the field.

The coin weighs 7.96 grams and measures 27 millimeters in diameter.

The coin has a mintage limit of 200,000 pieces, the same limit as most of the coins in the series.

The official issue price is $20 Canadian.

When purchasing through the RCM buyers will pay a price based on the current exchange rate.

There is a limit of three coins per household, with sales limited to the United States and Canada.

Talisman Coins sells the coin for $19.95. No limit was stated for Talisman customers.

Canada to honor ‘Father of Confederation’ on circulating commemorative $2 coin