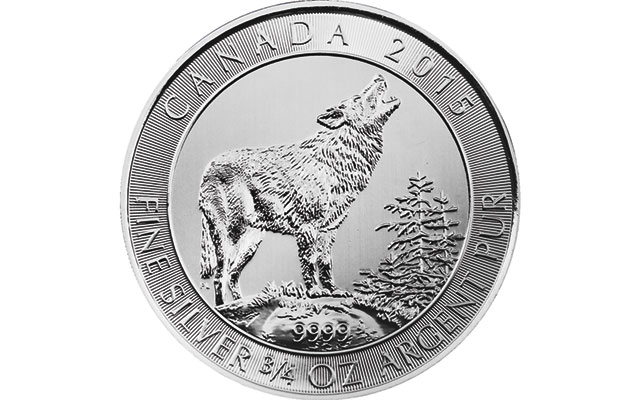 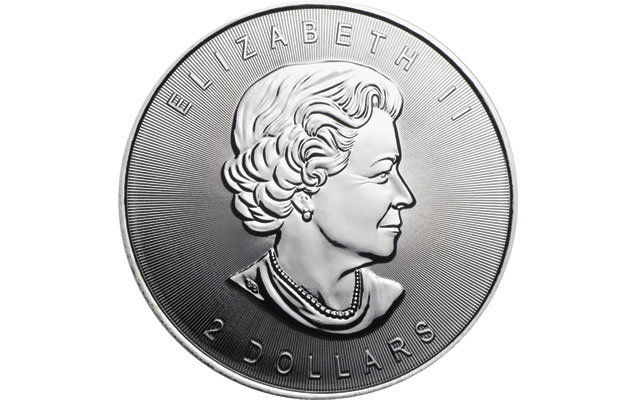 The Susanna Blunt effigy of Queen Elizabeth II appears on the obverse of the 2015 Grey Wolf silver $2 coin from Canada. 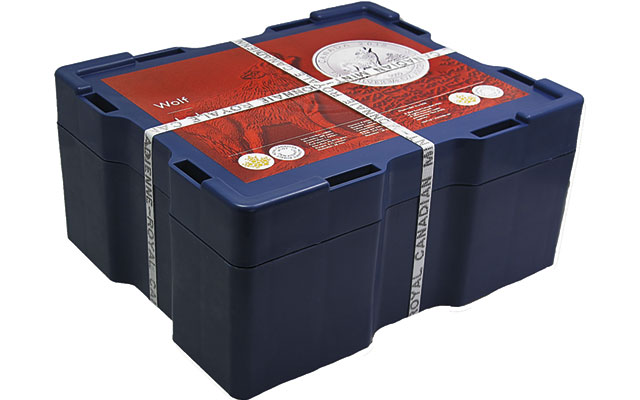 For big-time investors, the 2015 Grey Wolf silver $2 coin is available in “MintDirect Boxes” containing 600 coins, for a total of 400 ounces. Premiums for these boxes are smaller than on individual and “MintDirect Roll” purchases.

This is the fourth Canadian bullion coin since 2006’s Wolf half-ounce silver dollar to feature a wolf, all of which have been well-received by collectors and investors. Other coins showing a wolf are the 2011 1-ounce silver $5 coin in the Canadian Wildlife series, and the 2014 Howling Wolf .99999 fine gold $200 coin.

The new $2 coin features a howling grey wolf in a natural scene on the reverse, surrounded by inscriptions. Pierre Leduc designed the reverse, which was engraved by Stan Witten.

The coin features the radial line finish that was introduced on the 2014 Maple Leaf silver coins.

The 2015 Grey Wolf $2 coin is being sold exclusively through APMEX. The firm offers the coin in individual quantities, as well as in MintDirect Tubes (30 per tube, totalling 20 ounces) and MintDirect Boxes (600 per box, or 400 ounces).

The mintage limit has not been set and will be announced later, according to Terry Newton, product manager at APMEX.

“Since it is a 2015 coin I am sure they will be selling for some time,” Newton said.

“There is not a [specific, limited sales] window,” she added.

Like most coins sold by APMEX, the prices vary depending on quantity and payment method. Prices here reflect the cost of one item, paid via credit card.

Based on the current spot value of metal (which at $17.49 an ounce is equal to about $13.12 per coin), these prices indicate a premium of about 31 percent over the precious metals or “spot” value of the metal for smaller quantities, and 24 percent for the box of 600 coins.

These premiums are in line with pricing for other exclusive RCM bullion coins, both through APMEX and other partners, based on past reporting when these coins were released. The Devil’s Brigade coin, for instance, now trades for a 237 percent premium over its precious metal value.

Current pricing for the 2015 Grey Wolf $2 coin is available on a special page at the distributor website.

A shipping charge is additional and not included in the above pricing.