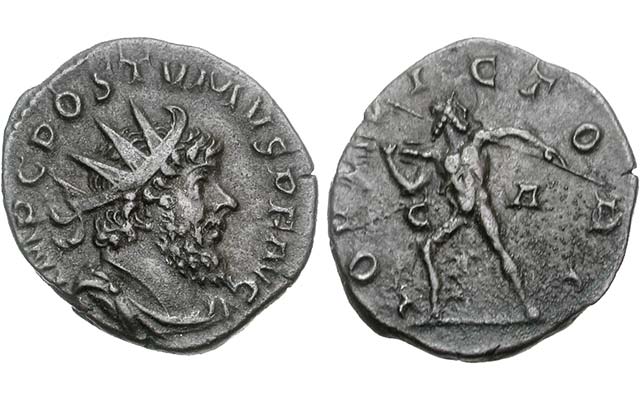 Postumus ruled the western provinces of the Roman Empire from 260 to 269. He issued a great many portrait coins, including this double-denarius that shows Jupiter hurling a thunderbolt. 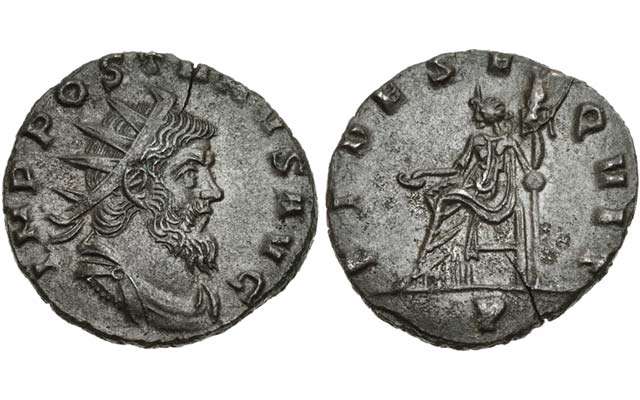 As a secret ally of Postumus, Aureolus struck coins for Postumus in 268 at Milan. This double-denarius of Aureolus portrays Postumus and the personification Fides (“loyalty”). 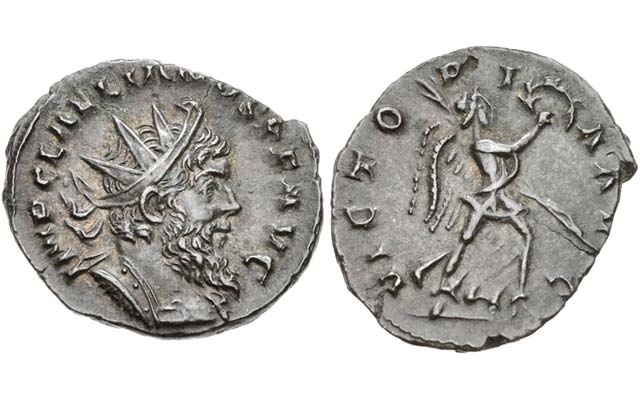 A brief revolt against Postumus was staged in 269 by Laelianus, a Spaniard who governed part of Germany. He issued this double-denarius, which shows his portrait and Victory advancing. 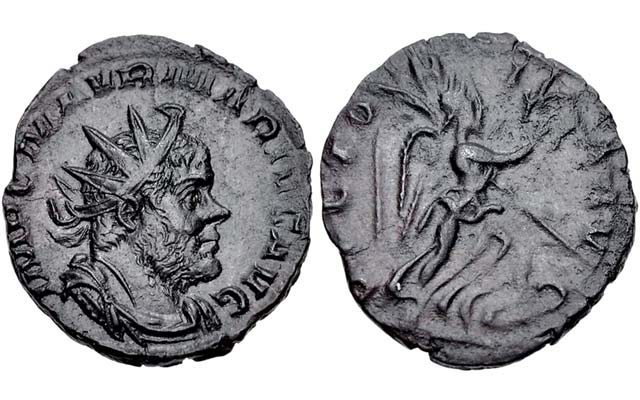 Said to have been a blacksmith before he was a soldier, and then an emperor, Marius issued this double-denarius in 269. Unlike his contemporaries, Marius’ beard is comparatively short. 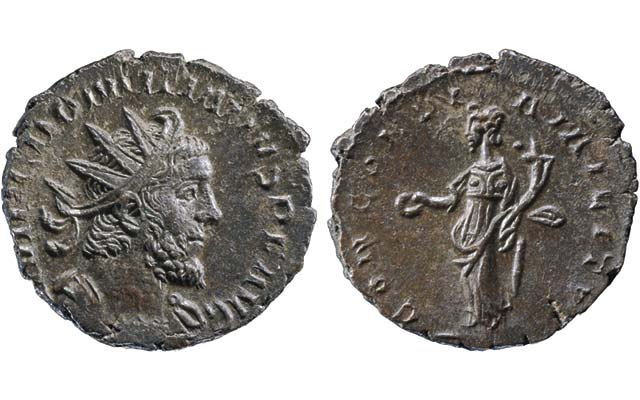 The second of just two known examples, this double-denarius was issued sometime between 269 and 271 by Domitianus, a rebel known only by virtue of the coins he issued.

Life in Western Europe was perilous in the mid-third century A.D.

Roman civilization in the provinces comprising the territories of modern-day Britain, Spain, France, Germany and neighboring nations seemed on the verge of extinction by threatened Germanic invasions from across the Rhine.

Normally, these “barbarian” raids were limited in scope and eventually could be repulsed by Roman forces in the region. However, by the A.D. 260s, the Roman defensive network in the West had been greatly weakened, a result of civil wars and a dire need for troops elsewhere in the empire.

In the year 260, the Roman world was especially vulnerable: the Juthungi had invaded Italy and the Roman Emperor Valerian I (253 to 260) and his army had been captured by the Persians. The situation wasn’t much better in the West, where local commanders were left to fend for themselves.

In the midst of all this, a rebellion took place in which Postumus, a governor of Germany, set himself up as an independent emperor in the West. From the larger Roman world he carved his own empire, which survived nearly 15 years before finally being taken by force in the spring of 274 and reintegrated into the Roman Empire.

Postumus’ “Romano-Gallic Empire” won broad support within its borders, and its people fared better that one might imagine they would have under the governance of the central Roman authorities, who during that time were distracted by a myriad other threats and concerns. Postumus ruled effectively for nine years, until he was murdered in 269.

All told, eight men issued coins in connection with this short-lived empire. The coins of four issuers — Postumus, Victorinus, Tetricus I, and Tetricus II — were struck in very large quantities and are readily available. A collection of the most common coins of this empire, being the billon double-denarii (antoniniani) of these four emperors, can be assembled with ease for a surprisingly modest sum.

However, coins of the remaining four emperors — Aureolus, Laelianus, Marius, and Domitianus — are decidedly less common, with the last being among the fabled rarities of the Roman world. The “reigns” of these four men, all of which occurred between circa 267 and circa 271, are worthy of individual discussion.

Aureolus: The first of these usurpers is of special interest because he forged a secret pact with Postumus while serving as a cavalry commander for the Roman Emperor Gallienus (253 to 268). He was based in Mediolanum (modern Milan), an important post in the defense of Italy and neighboring provinces.

Late in the reign of Postumus, seemingly in 267 or 268, Aureolus proclaimed his allegiance to the Gallic rebel and led a revolt against Gallienus. Instead of issuing coins in his own name, though, Aureolus struck coins at Milan that bore the portrait, name and titles of his benefactor Postumus.

They may be distinguished from Postumus’ own coins by their peculiar style and fabric, by the inclusion of mint officina marks (P, S or T), and often by their reverse inscriptions, which typically end with AEQVIT, EQVIT or EQVITVM, a distinctive feature that is thought to be a reference to the cavalry forces under Aureolus’ command at Milan.

Laelianus: Unlike Aureolus, who had formed an alliance with Postumus, Laelianus took the opposite approach and raised a rebellion against the founder of the Romano-Gallic Empire. His effort to overthrow Postumus occurred in the first half of 269 and he did not long survive. Laelianus’ revolt appears to have lasted between one and three months — hence the rarity of his coins.

Laelianus was a Spaniard who had been appointed by Postumus to a governorship in Germany. He revolted at Mainz with two legions under his command, seemingly while Postumus was busy defending his eastern border against an invasion by the Roman Emperor Claudius II (268 to 270). Laelianus’ coins bear distinctive portraits of the rebel, engraved in the style of his opponent Postumus.

Marius: Soon after Laelianus’ revolt had been put down, Postumus was murdered, perhaps because he did not allow his soldiers to sack Mainz, the city from which Laelianus had staged his rebellion.

In the power void that came into being afterward, a soldier named Marius was hailed emperor by his fellow soldiers. He is said originally to have been a blacksmith by trade. How much of this is true is anyone’s guess, as the sources for this period of Roman history seamlessly merge fact and fiction.

His reign, which seems to have occurred in the summer or fall of 269, is reported to have lasted only two or three days before he too was murdered, with a sword of his own manufacture. But his coins — though rare — survive in sufficient quantities that modern historians agree that his reign must have lasted longer, perhaps about three months. Since some of Marius’ coins were struck with reverse dies that originally had been used to produce coins of Laelianus, it is presumed that Marius struck most of his coins at the city of Mainz.

Domitianus: The rarest of all coins from this empire were struck in the name of a certain Domitianus. The style and fabric of his coins suggest that he staged a rebellion against the Romano-Gallic Emperor Victorinus (269 to 271), perhaps sometimes late in the reign. Only two examples currently are known.

The first example of his coinage was discovered in a hoard of some 1,300 pieces in north-central France in 1900, and the second was found in a hoard of about 5,000 coins unearthed more than a century later, in 2003, in south-central England. The authenticity of his coinage is now considered to be beyond dispute. Thus, we are fortunate to add — with confidence — another name to the list of rebels who made momentary grasps at power during the waning years of the Romano-Gallic Empire.