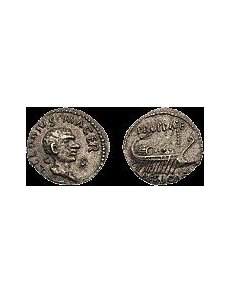 A rare Roman Imperial coin from a short-lived reign during a civil war was the highlight of Freeman & Sear’s Manhattan auction No. 3, held Jan. 3 in New York City.

The coin is “extremely rare, apparently from an unpublished die pairing and one of only a handful of Clodius Macer portrait denarii known to exist,” according to Freeman & Sear. The abbreviation S C (Senatus Consulto) “in this case mistakenly inverted,” plus his depiction without a laurel crown, suggests he was revolting against Nero and not the Senate, according to the catalog.

The coin, in Nearly Extremely Fine condition and “toned,” led the firm’s auction, which was held in conjunction with the New York International Numismatic Convention.

Greece, Seleucid Kingdom, Alexander I Balas, circa 150 B.C. silver “marriage” tetradrachm, Ptolemais, jugate busts of Cleopatra Thea as Tyche and Alexander I, “scarcely” 20 of these marriage tetradrachms are known to exist, all “struck from only three obverse dies, all exhibiting a freshness that would point to a very brief issue,” “a couple of light scratches, Very Fine plus,” $59,000.

Roman Imperial, Constantius II, circa A.D. 337 to 361 silver ingot of one Roman pound, 319 grams, shaped like a double ax-head with flaring blades, “the image of Constantius II softly struck at the top of his head, one corner chipped,” Good VF, $26,550.