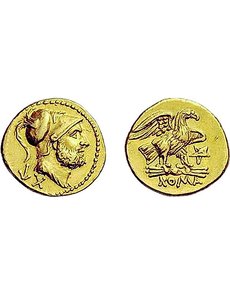 The RBW Collection featured multiple rarities for specialists as well as affordable options for all levels of buyers, but one highlight of the auction is the second known example of its kind and the only example available publicly.

The circa 209 B.C. gold 60-as coin from Central Italy is one of the most significant coins in the collection, not only for its rarity — the only other known example is in the British Museum — but for its historical value (some experts suggest it was struck in Etruria) and pedigree (it was once part of the collection formed by Count Bartolomeo Borghesi and later, Enrico Caruso).

Numismatica Ars Classica’s buyer’s fees begin at 17.5 percent, with a 1.5 percent additional fee for telephone and Internet bidders. All results below reflect the 17.5 percent fee.