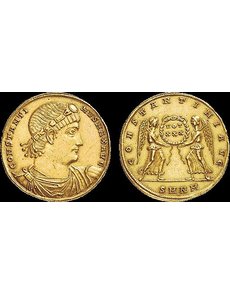 The unique, unpublished medal was reportedly issued in July 335 in Nicomedia to celebrate the jubilee of Constantine’s reign. The piece weighs 27.66 grams, which makes it equal to the coinage equivalent of six solidii.

The obverse shows a bust of the ruler with diadem (a type of crown). Two winged Victories hold a wreath on the reverse.

The piece was specifically produced to be distributed to soldiers and officials on a special occasion, according to the auction firm. On these special days, which included birthdays, accession days and other official celebrations, soldiers and officials alike were given an extra donation in addition to their pay.

In early imperial times, rulers learned that loyalty had a price, one that had to be paid continually, and so it became a custom to give precious metal items as a present on the occasion of throne jubilees, the firm said.

This medal came from a private collection in southern Germany and was acquired from Münzen & Medaillen in Basel, Switzerland, in 1972.

The medal is just one of many highlights of Roman material receiving strong bidding in the Gorny & Mosch auctions.

An extremely rare portrait aureus of Octavian, struck at a mint in Gallia Cisalpina between July and autumn 43 B.C., realized 120,750 euros ($163,434 U.S.). It shows the portrait of Julius Caesar on the reverse and was listed as Very Fine to EF.

The German firm also announced that it is accepting consignments for a March auction until Dec. 20. ¦