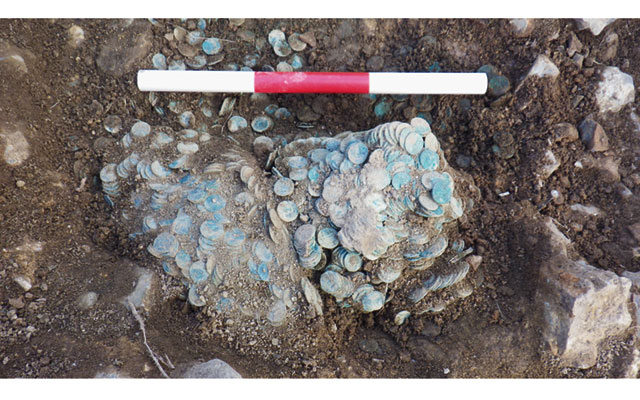 The Seaton Down Hoard as it appeared during the process of excavation. The hoard was found in East Devon in England’s southwest. 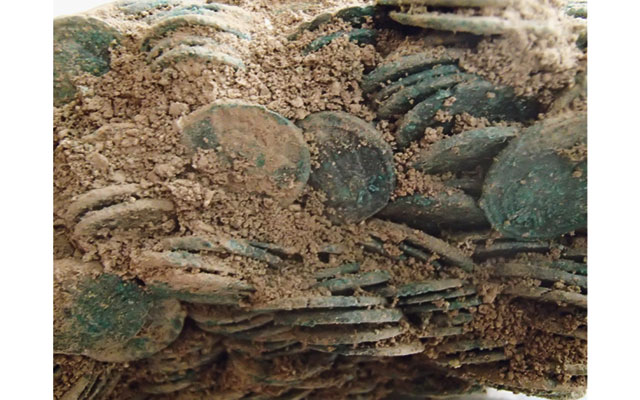 This image provides a closer look at some of the coins from the Seaton Down Hoard in the soil block. 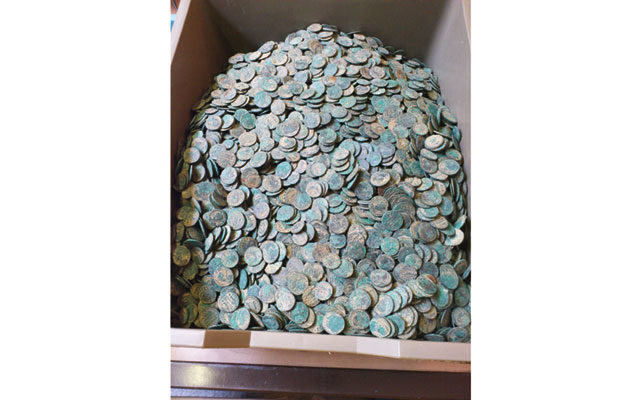 The Seaton Down Hoard as it appeared after light conservation by experts at the British Museum. 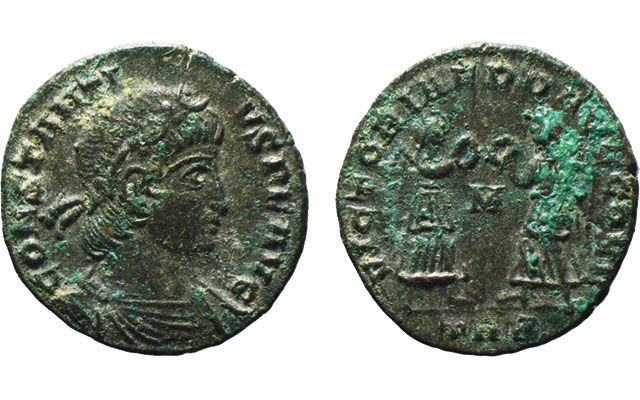 A bronze coin of Constantius II, struck at the Trier Mint circa A.D. 330s, shows two Victories on the reverse. The coin is one of some 22,000 coins found in the Seaton Down Hoard. 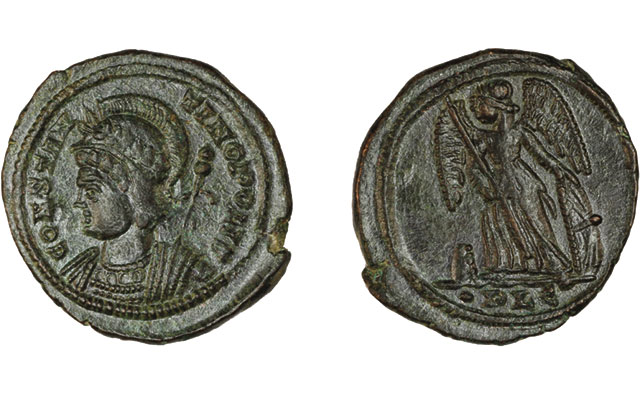 The millionth object recorded on the PAS database was this coin, struck by Constantine I to celebrate his new city of Constantinople (Istanbul). Struck at Lyon in A.D. 332, the coin was found in the Seaton Down Hoard in East Devon in late 2013.

A hoard of more than 22,000 Roman coins found in Seaton in East Devon is the fourth-largest hoard of coins ever found in Britain.

Announced Sept. 26, 2014, the discovery was made in November 2013 by East Devon builder and metal detector enthusiast Laurence Egerton while operating under license on Clinton Devon Estates land near Seaton Down. The findspot is near the Honeyditches archaeological site, which includes a Roman villa and a possible Roman fort. Devon is located in the southwest part of England.

In a press release, the coins are reported as copper by the authorities governing hoard finds, but collectors call the metal these coins are made from bronze.

The coins are not denominated but often called AE3 or AE4, reflecting their size, or simply bronze, indicating the metal.

After uncovering the coins, Egerton reported the find to the landowner, to Devon County Council archaeologist Bill Horner and to the British Museum’s Portable Antiquities Scheme through Devon’s Finds Liaison Officer Danielle Wootton. The hoard was then carefully removed in its entirety by a team of archaeologists and over the past 10 months the coins have been lightly cleaned, identified and cataloged by experts at the British Museum.

The Seaton Down Hoard was declared treasure at an inquest Sept. 12 — a formal process in Great Britain for found coin hoards.

Many of the coins found in the hoard are “very well preserved,” according to the press release issued by the Royal Albert Memorial Museum, which is trying to raise funds to acquire the coins.

Roger Bland, Keeper of Britain, Europe and Prehistory at the British Museum, said that while the hoard is one of the largest ever found within the former Roman Empire, “the [contemporaneous] financial value would not have been great, amounting to approximately four gold coins (solidi). This sum of money would possibly have provided the ration of four soldiers for one year or a worker’s pay for two years.”

Most of the coins in the hoard are associated with Emperor Constantine I (the Great) (A.D. 306 to 337) and his family.

Constantine I was made emperor while in Britain in A.D. 306. He promoted Christianity as a state religion and was successful in bringing the empire under one ruler. The latest of the coins come from the joint reign of Constantius II (A.D. 337 to 361) and his younger brother Constans (A.D. 337 to 350).

The coins reflect a turbulent period in the history of Roman Britain, when settled periods of affluence were interrupted by civil wars, rebellions and invasions, and about 50 years after the hoard was buried, Rome’s imperial presence in Britain ended.

Isca, now Exeter, was the economic and social capital of southwest Roman Britain, and Exeter is where the Royal Albert Memorial Museum hopes to keep the coins. The museum hopes to purchase the coins after the Treasure Valuation Committee (a group of independent experts advising the national government) assigns a value later this year.

The coins would complement the museum’s collection of local Romano-British objects, which include finds from Honeyditches, according to Exeter’s Lead Councillor for Economy and Culture, Rosie Denham.

Finder Egerton said that, initially, he found two small coins the size of a thumbnail sitting on top of the ground and then, as he began working in a grid formation in the surrounding area, received a signal from his metal detector indicating a likely iron target.

“Most detectors are set up to ignore iron but I decided to dig the earth at that spot and immediately reached some iron ingots which were laid directly on top of the coins,” he said, in the press release. “The next shovel was full of coins — they just spilled out over the field. I had no idea how far down the coins went so I stopped immediately and phoned my wife to come to the site with a camera.”

Egerton said that, under the terms of his license with the land caretakers (Clinton Devon Estates), he reported the find and was instructed to remove the loose coins and then fill in the hole.

“Between finding the hoard and the archaeologists excavating the site I slept alongside it in my car for three nights to guard it,” he said, in the press release.

“It’s by far the biggest find I’ve ever had. It really doesn’t get any better than this.”

An interesting postscript to the discovery of the hoard is the fact that one of the coins in the hoard made history by being the one-millionth coin registered since 1997 by the Portable Antiquities Scheme, the system established via the Treasure Act of 1996 to process claims of hoards.

Under the law, anyone who finds a group of coins buried together, or any artifact that is suspected to be 300 or more years old and has a 10 percent gold or silver content, has a legal obligation to declare it to the local coroner within 14 days. Both landowner and the finder share proceeds from the sale of the hoard contents.

The Portable Antiquities Scheme was set up to promote and improve the recording of archaeological finds, and operates through a network of finds liaison officers who can assist in the identification and recording of objects the public have discovered.

Finds liaison officers have examined numerous objects that may otherwise have gone unrecorded, across the country. For a record to be useful, a finds liaison officer needs to know the location of the find, the depth where the object was found and the type of land where it was found, for example a beach, a field or a back garden.

The coins are subject to the terms of the United Kingdom’s Treasure Act, which is further explained at its website.