Rolling fold is a distinctive form of planchet burr 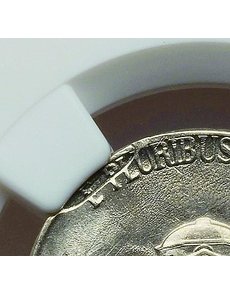 Reverse face of a 1972-D Jefferson 5-cent coin has a rolling fold upon which the letters e plu were struck. 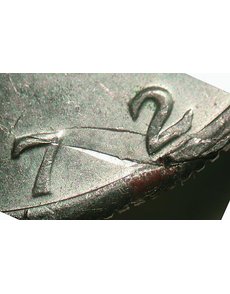 A rim burr is found on a 1972 Kennedy half dollar. It was most likely torn up by the feeder finger. 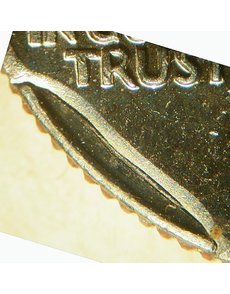 A rolling fold appears on the obverse face of a 1967 Washington quarter dollar. The squat, symmetrical shape is characteristic. 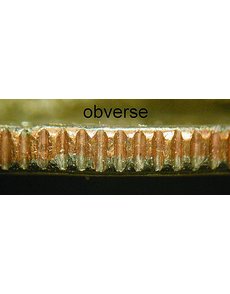 Close-up view shows the 1967 Washington quarter dollar’s edge next to the rolling fold. The reeding is undisturbed. 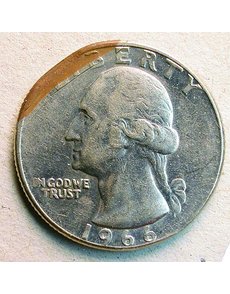 This 1966 Washington quarter dollar shows a form of pre-strike damage that some might mistake for a rolling fold.

The blanking operation involves a long strip of coin metal passing beneath a battery of blanking dies (punches) and above a perforated base plate. Each blanking die forces a disc of metal through the hole underneath.

In order for a coin blank to be punched out cleanly, the blanking die and the hole in perforated base plate must have smooth, sharp edges. If the edge of either element gets dull or chipped, this could prevent a blank from detaching from the coin metal strip. At the very least, it can leave an irregularity — a burr — poking up from the newly punched blank. That burr will then be folded over during the upsetting operation and, ultimately, struck into the coin. At this point the error is known as a “rolling fold.”

Identified, described and named in the 1990s by error researcher Arnold Margolis, rolling folds are distinct from other types of burrs that affect blanks and planchets. As seen in the illustrated 1972-D Jefferson 5-cent coin, a rolling fold is a low, broad, symmetrical tongue of metal that intrudes a short distance into the field. Few are larger than this one.

No disturbance is ever seen on the portion of the edge adjacent to a rolling fold. This is in marked contrast to burrs that form later in the minting process. Called “rim burrs,” these can theoretically be generated by the upsetting mill, the feeder finger, or any other moving part encountered prior to striking. Judging from groups of coins I’ve examined with identical-looking rim burrs in identical locations on the face struck by the hammer die, a significant percentage of such errors must be generated by the feeder finger immediately before the strike.

The illustrated 1972 Kennedy half dollar shows a classic rim burr invading the last two digits of the date. It takes the form of a long, narrow spur with a sharp tip. The edge of the coin is gouged and the design rim is damaged, exposing the copper core.

A second rolling fold is seen on the obverse face of a 1967 Washington quarter dollar. The copper-nickel clad composition of this coin provides additional diagnostics. The reeding is intact and the edge undisturbed. The copper core does not extend onto the rolling fold, a characteristic common to all clad coins with rolling folds. In contrast, rim burrs often carry along a significant amount of copper core material.

The rolling fold in this example lies on the face derived from the original upper face of the coin metal strip. We can tell this is the case because the reverse clad layer has been dragged onto the edge a little bit, obscuring some of the copper core. This effect occurs on all clad coins and occurs when the blank is forced through the hole in the perforated base plate.

The presence of the rolling fold on the upper face is consistent with a blanking die that was dull or that had a small chip on its edge. Theoretically, rolling folds should be largely or exclusively restricted to the face originally impacted by the blanking die, since it is only here that a vertically oriented burr can form.

Rolling folds are quite rare, but you wouldn’t know it judging from eBay listings. Many errors on that auction site are identified as rolling folds but are something else entirely. Some are rim burrs. Some represent other forms of pre-strike damage, as seen on this 1966 Washington quarter dollar. On this example a wide flap was torn up and folded over, but it occurred after blanking. Some purported rolling folds are lamination errors while others are retained cuds. And some represent post-strike damage.

Collectors in search of a bona fide rolling fold must carry in their heads the handful of critical diagnostics described here.