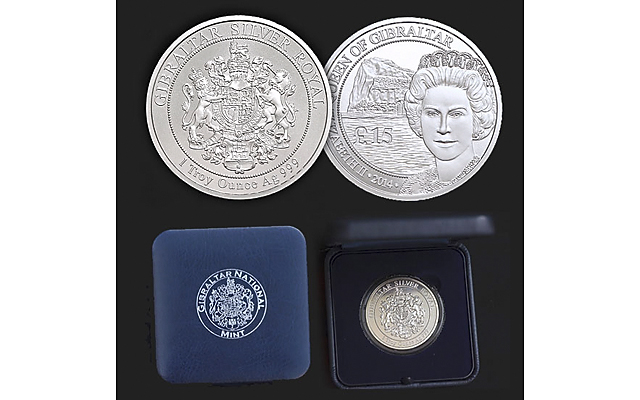 A 2014 Royal 1-ounce silver £15 coin features Queen Elizabeth II and the famous Rock of Gibraltar, right, on the obverse. The coat of arms of Gibraltar’s government is on the reverse, left.

The 2014 Royal £15 coin, a 1-ounce .999 fine silver piece, is available in three versions: a standard, plain coin, a version with color, and another with an embedded tiny diamond. No information about finishes is available.

The coin was struck by the Austrian Mint for Gibraltar, which sells its coins through the Gibraltar Philatelic Bureau. As a British Overseas Territory, Gibraltar had its designs “approved by the Palace in London,” according to the bureau.

The obverse of the Royal silver coin features a portrait of Queen Elizabeth II in front of the Rock of Gibraltar.

The coin measures 37 millimeters in diameter and weighs 31.1035 grams.