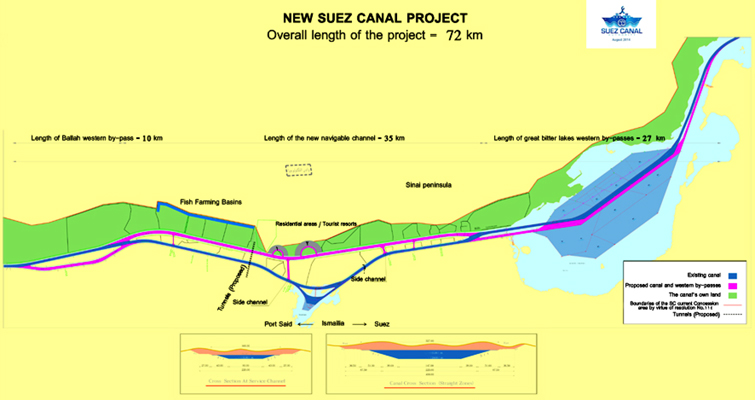 A modern project to expand the Suez Canal's capacity was completed earlier in 2015. A map shows the changes that occurred in the expansion. 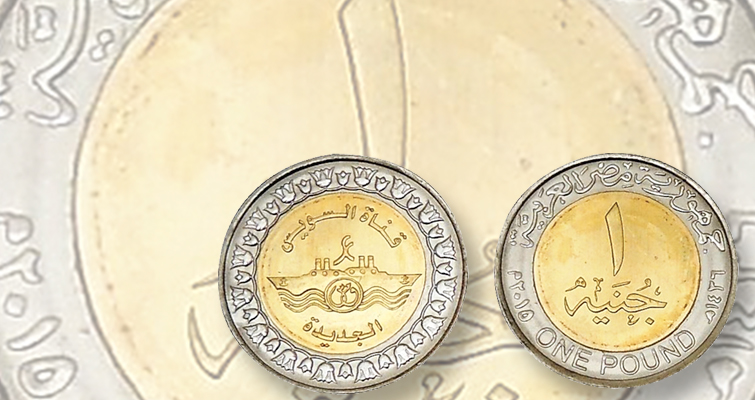 Egypt commemorates the completion of a new Suez Canal project this summer with a 2015 circulating commemorative 1 pound coin.

The coin celebrates the opening of a project to expand the capacity of the existing Suez Canal (which opened in 1869). The modern project began Aug. 4, 2014, and was completed on July 16, 2015, with an official opening Aug. 6.

One side of the coin (it is not confirmed which side is the obverse) shows a stylized SC logo for the Suez Canal, below which appears a ship and waves, among other elements.

The other side of the coin features the numeral and denomination text, the latter in both Arabic and English.

The coin weighs 6.5 grams and measures 25.65 millimeters in diameter.

Egypt has honored the Suez Canal on at least five other coins, including a 1956 25-piastre piece to mark the Suez Canal nationalization. Two coins were issued in 1976, in 10-piastre and 1-pound denominations, and two more 1-pound coins were released in 1981, all to help celebrate the 1975 reopening of the canal following its closure in 1967 during the Arab-Israeli War.

The 2015 coin has begun appearing for sale through online auction sites; Coin World has not confirmed whether a U.S.-based distributor will offer the coin.