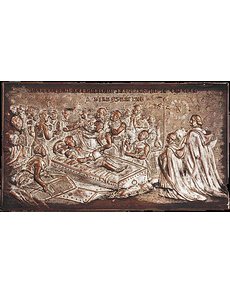 This piece is pictured without description in French numismatist Jules Florange’s commemorative booklet, Retour des Cendres, December 1840 par les Médailles, prepared for the 100th anniversary of “the Return of the Ashes” and Napoleon’s entombment in the Invalides. The centenary fell during German occupation of Paris, and publication was delayed until after World War II and the death of Florange himself in 1957.

Napoleon was exiled in 1815 to this remote South Atlantic island at the end of the “Hundred Days.” Here he wrote memoirs and feuded with petty-minded British governor, Sir Hudson Lowe. Restored Bourbon kings and successive British governments rebuffed all efforts to return his body to France. After seizing the throne in July 1830, the “Citizen King” Louis Philippe appropriated the flourishing Napoleonic legend and found Queen Victoria favoring this romantic proposal.

Irish patriot Daniel O’Connell initiated the return with a letter to Prime Minister Lord Palmerston on May 12, 1840, who conferred with the French government.

In June, French cabinet minister M. de Rémusat announced Louis Philippe’s decision to send French warships La Belle-Poule and Favorite, commanded by his son, François, Prince de Joinville, to Saint Helena, to secure Napoleon’s body and return it to France and a magnificent tomb in the Invalides. The casket was taken from its rock-lined grave and after removal of four layers of lead and mahogany the body was found essentially intact.

Aumonier of the fleet, Abbé Coquereay, recited the Office of the Dead and Emmanuel de las Cases recorded that Napoleon wore the uniform of a colonel of the Chasseurs de la Garde, the Grand Cordon of the Legion of Honor and the Order of the Iron Crown. Buttons and epaulettes were bright, as were silver vases holding the heart and entrails. The body crossed the sea to Cherbourg, was transported up the Seine and crossed Paris atop a monumental funeral car Dec. 2, anniversary of the victory of Austerlitz, to entombment in the Invalides.

The plaquette is rare today.

David T. Alexander, is author of American Art Medals, 1909-1995 and a fellow of the American Numismatic Society. He is a longtime numismatist and reseacher.